Well Bridget - the bag is nearly finished and I'm confident that the design will make a nice big bag. It should be done by next week - I didn't have a big enough piece of fabric to line the bag with so it's on hold until I get to the quilt shop.  I decided to change the way I sewed the hexagons together but you can use the original quilt as you go design shown on the tutorial. For this design I added more hexagons.  The original bag had 16 - the new design has 34.

Starting with the hexagons - these measure 6" (15cm), but if you make the quilt as you go hexagons you'll need to cut a lining hexagon measuring 7" (18cm): 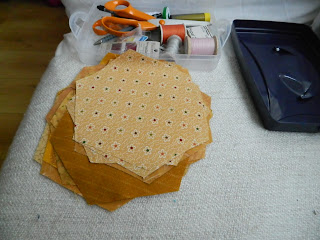 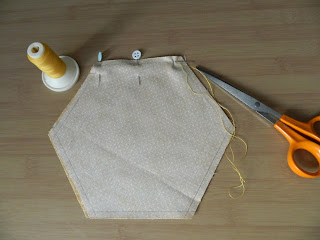 Press the seam and see the little hexagons appear at the junctions, 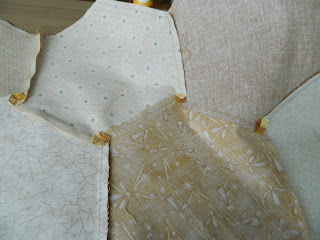 This makes the joins very crisp. 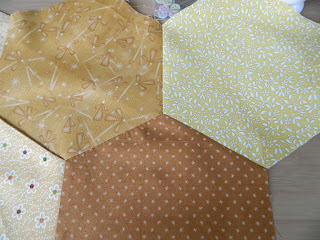 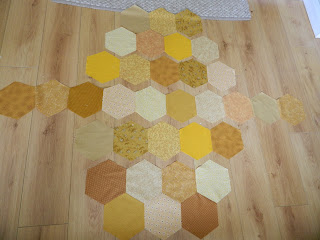 Then sew the rows together. 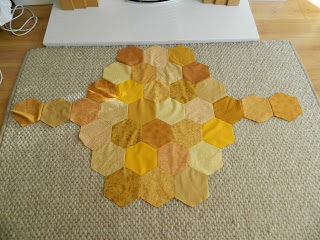 Sorry it's a bit wrinkled!

At this stage, if you've used the quilt as you go method then sew the sides up in the same manner as the one in the tutorial. You'll have an extra one up the side. If you are making this method you need to layer the hexagons on to wadding and backing wrong sides together.  I'll post Part 2 next weekend.

The little bag measured about 6" finished 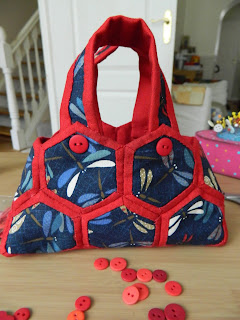 - the medium bag measures about 15" - they look the same but you can see the difference in the number of dragonflies in each hexagon.  The medium bag is full of 50g balls of wool. 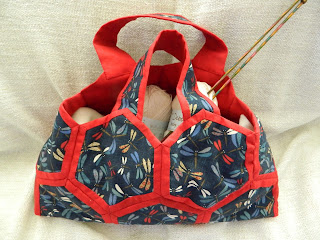 The yellow design, when finished will measure about 21" across. I'll borrow the dragonfly bags back to photo them all together.

I'm having a bit of a nightmare loading photos so will have to stop here and try later. I've got lots of things to share so let's hope I can sort things out.

Posted by strawberrypatches at 19:57 2 comments:

It's official - I'm in colour heaven.  This week I have finished the dancing squares quilt - the colours just make my heart sing! 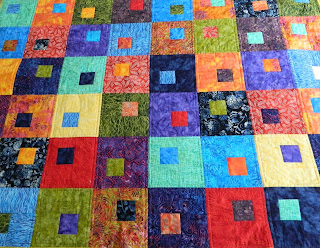 I have to say I'm a bit into orange and lime at the moment. 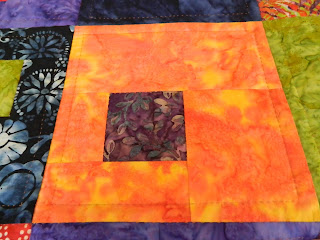 I had to piece the back so I used some of the offcuts along the join. 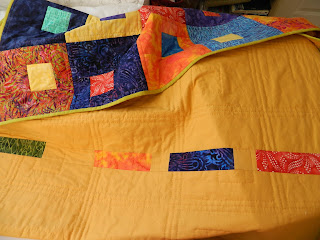 John was on holiday this week too so we took the boys off to the local park for a bit of a swing and a bit of a photo session. 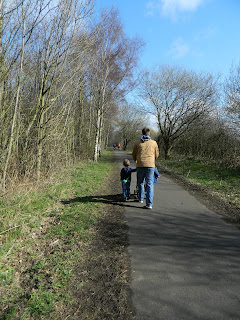 The Coast to Coast Cycle track runs very close  - John runs alongs this (not coast to coast!) two or three times a week and Will cycles up and down every weekend and some weekdays now the nights are lighter. It works out the kinks. We used to cycle up and down this regularly with a picnic, friends, the dogs and any other waifs and strays picked up along the way.  The boys would cycle up ahead and then come back down to me because I couldn't keep up! They must have covered the route three or four times just doing that. The only thing that really annoys me about the track is the dog poo. You can tell when you are getting near the houses because the dog poo increases and you end up doing a slalom. Disgusting. They don't take the dogs for a walk, they take them for a poo and leave it there for some unsuspecting child to step in. Maybe we should shovel it all up, follow them home and dump it on their garden paths. Anyhoo..... 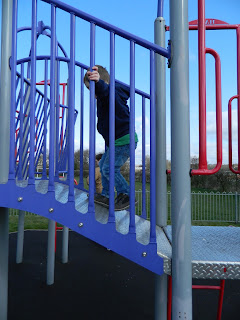 Ben loves to climb but he's a bit clumsy so he usually comes away with a few bumps and scratches! 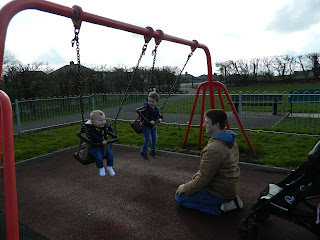 Max spent must of the time chuckling - but then he does anyway - he's such a jolly baby. Although he has had an ear infection recently and he didn't smile much then poor little mite! 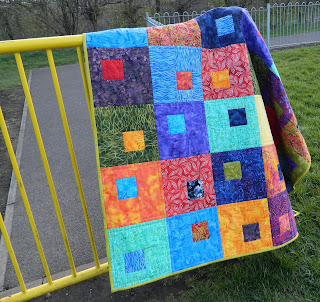 There were quite a few people there so I had to wait until it went quiet for a few minutes before I took a couple of snaps. 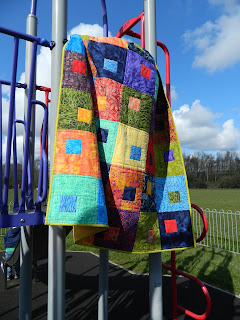 Still trying to lose weight for the summer I haven't done much baking although I made some Apricot Tops for the class. 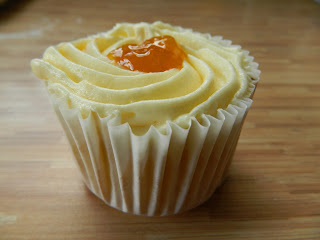 Simple vanilla sponge with an apricot butter icing and a little dob of apricot jam in the middle. It's lucky Will does so much physical exercise because I think he ate about five or six of these over the course of a couple of days.

In other quilting news I have been stitching away at the Rail Fence and Stars quilt whilst watching the F1 practice sessions. 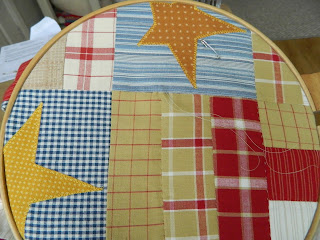 I didn't do anything during the race which is unlike me. I don't often watch the telly without having some stitching on the go.  In my defence I had been stitching all morning: 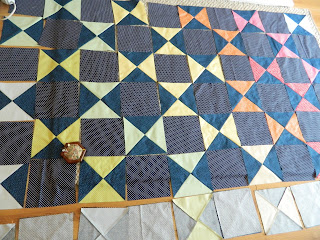 7.30am - The hour glass blocks laid out in order and the first two rows laid right sides together. 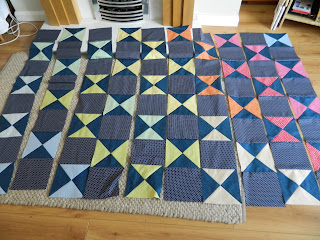 Lunch time - all the rows sewn (I only had to unpick one because it was sewn in the wrong direction - a miracle!) 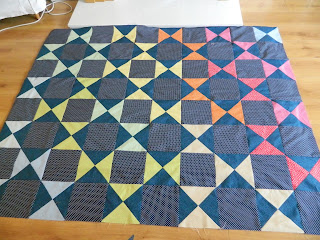 3pm all pieced and ready to sandwich. Except I have no backing and no wadding. It could do with a border I think, but it is already 60" x 75" and I've exhausted Hilary's supply of dark blue dotty material.

I've also spent quite a lot of time writing up patterns this week. One which is not mine but I can't find the original which was in a magazine I lent to someone and didn't get back. This is the original quilt which was made about 20 years ago. 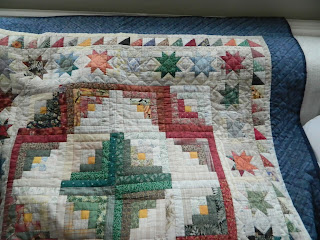 I made two - this one with a blue border and another with a green border. The same, but different. I spent one afternoon writing up the centre medallion. I know this is not my design and if I can find out who did the original one I will certainly publish the name. The pattern was in an American magazine called Traditional Quiltworks which is sadly no longer published. 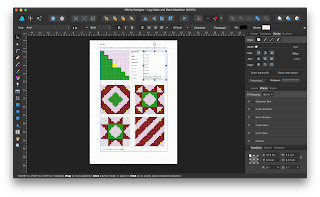 The 'barn-raising' setting is the same as the original but I rather like the eight pointed star.  They are all variations of the log cabin design which I love. All the logs are 1" finished so you have to be really accurate with the stitching. Shall I make a third quilt? Should I just get my fabric stash and cut 1" strips from a completely random selection? Or should I just leave well alone! Watch this space I think.

So now I'm going to head off to Ikea to buy some bits and bobs for the Shabby Chic class on Saturday - maybe some glass bottles to decorate or little boxes. I'll see what they have. I've already prepped a few stitching things but I need to do some instruction leaflets.  Tomorrow I'll be back to work, setting our new budget, (tiny - courtesy of the present government).  It's been a good break and the last time I'll get off until a week in August but I'm totally chilled and ready for the world.


Posted by strawberrypatches at 09:49 2 comments: