Urge to be girly - it must be spring

Just a quick update on Flossie - she is getting stronger each day and is adjusting to life on three legs.  She won't be joining Scruffy in the outside hutch until her wound is healed and her fur grown back though. She's still not eating and drinking as much as we would like but she's survived!  My bank balance, however is in terminal decline. What I have learnt is that the service and care from a vet is second to none. 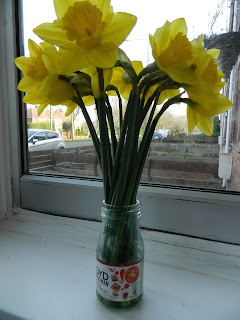 I came home from the shops the other day with some daffodils and plonked them in the nearest receptacle whilst I unpacked the shopping. The sauce by the way is the same as every other tomato sauce in a jar. Utterly disgusting. I must spend the time to make some proper stuff instead of taking the easy way out. However I think I might give the jar a shabby chic makeover because it it's rather a nice shape. 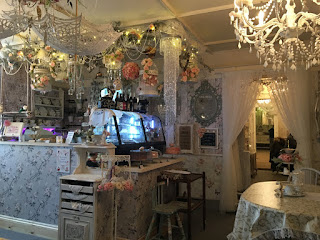 Jan said I would love it or hate it. I think I'm more in the latter camp although I recognise the huge amount of work that's gone into it - I just wouldn't like to be the cleaner! They had perfumed candles burning too which I really don't like, especially when I'm eating; it's an assault on the senses, not to say an air pollutant.

I called into Bradley Gardens Nursery which I have passed so many times and promised myself I would go to.  It's a walled garden - bare at this time of year but still so very interesting: 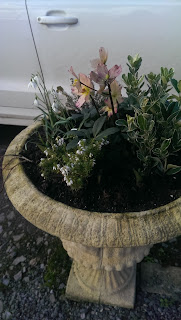 Beautiful Hellebores and Snowdrops in an urn 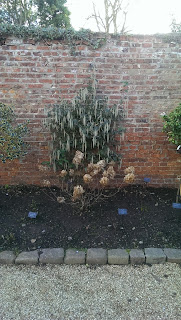 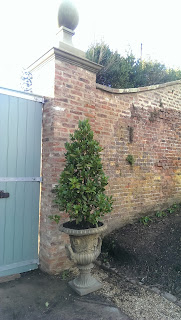 And a standard bay tree next to the beautiful wall.  There's also a fabulous cafe built into the victorian glasshouse along one wall.  Unfortunately I'd just had tea and a piece of tiffin at Elisa Rose but I'll definitely call in at different times of the year to see how the gardens look.  There's also a few lovely shops built into the wall and some plants and (expensive!!) pots for sale.

My friend commissioned a heart for her husband for Valentine's Day.  I had a little angel heart that I had started a long time ago and abandoned because I couldn't get inspiration. 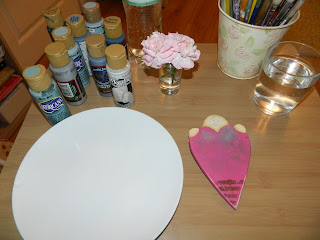 I started by painting over the old colour - there is a little bit of sculpting paste on but I decided to leave it. 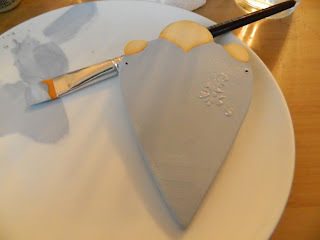 Then I painted a plaid background and a little space for the wording - I love the painty clutter on my little table! 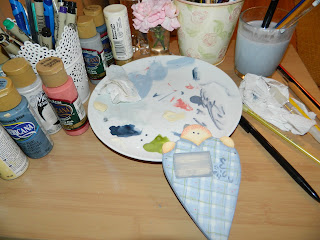 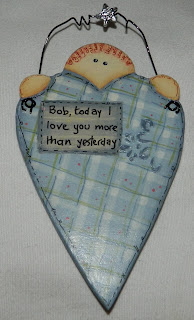 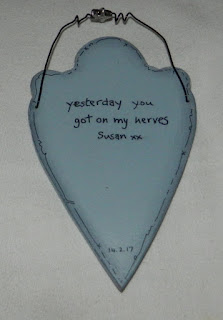 I made one of my favourite ever bakes last week 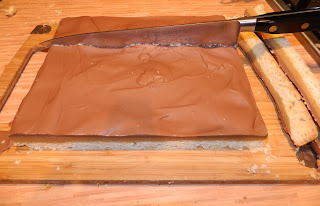 Millionaire Shortbread - the trimmings are for the chef. 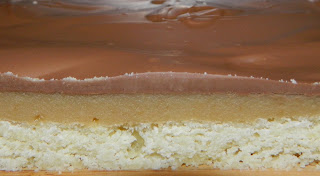 None of your waffer-thin, sprayed on toppings though. Buttery Shortbread with a hint of sea salt, creamy soft caramel and milk chocolate topping, poured over when it just starts to thicken so you get thicker bits, like an Easter Egg.  Nom Nom.

I ran a workshop for would-be Durham Quilters yesterday - there are some promising ladies and they have signed up for a second workshop to learn how to design a wholecloth quilt. This was the most popular choice for the block they made - called a Rose in a Rose. 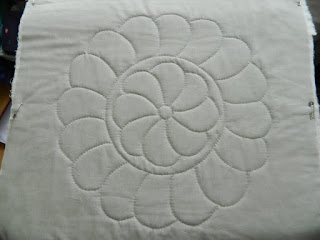 Alex and Will are braving the wind this afternoon to visit the charming Crook Hall Gardens in Durham City so it's peaceful enough to relax and do some stitching, the weekend chores are done, so it will be guilt free.

So why have I got the urge to do something girly? Not girly like Elisa Rose but fresh and Spring-like.  I think it's the gloom that we have endured for the last few months. There is sunshine today and we have had some bright days but on the whole it has been a gloomy, grey winter.

Some spring shades to make a little hanging and a mat for the chest in my bedroom. 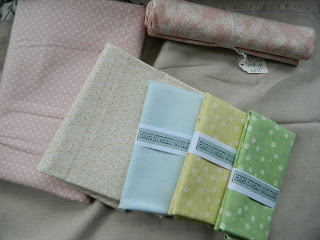 I have a few projects in mind. The linen has sparked my creative juices (mixed metaphors?) to make some hangings. I saw a little mat I liked somewhere on the internet so I have done a rough drawing and will have a little potter making this - about 6"-7" I think. It will have little embroidered flowers around the outside. 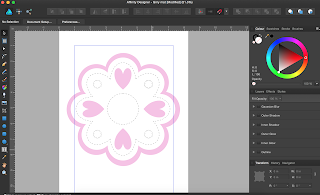 So Flossie and I are going to to settle down to watch the rugby this afternoon and I haven't decided whether to start the little mat or continue with my Moorland Blanket. Considering last Sunday was spent wondering whether the little bunny would survive her operation I feel so glad that I am now watching her nibbling sweetly at some kale and groom her little face so daintily.

Until next time xxxx

Posted by strawberrypatches at 13:11 2 comments:

What a weekend! Little Flossie Rabbit - the one we acquired because Steph is allergic to her, (they got her for Ben); the one who was stolen from her hutch and was found four days later by someone who got in touch with us via Facebook - that Flossie - do you remember?  When Will cleans out their hutch we put them in a little run in the garden.  A cat appeared in the garden and Flossie went wild, careering about the run.  To cut a long story short she managed to trap her foot and was so desperate to get free she broke her leg.  She broke her leg so badly that she needed to have it amputated. On Saturday night we had to transfer her to the overnight emergency vet after her operation so they could look after her. She had a canula in her left ear which was bandaged in red. 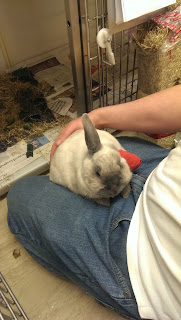 Will, my big tough first-born was absolutely devastated, I have to admit I was as upset about him being so upset. She came home on Monday (yesterday) and we have been feeding her with what is essentially liquid hay and medicine to make her guts work.  Apparently rabbit tummies shut down very quickly. She's not out of the woods but things are looking better. This afternoon she was well enough to give me the stink-eye when I gave her some medicine.  Getting back to normal then.

I'm supposed to be spring cleaning but can't get on because Flossie's hutch is in the middle of the living room. Now I'm stressed out thinking I'll not get things I had planned for the week done and will be back to work with a house that could quite easily be called a skip.  A bit of crochet is in order I think. Then some pattern writing for a workshop on Saturday.

Deep breaths.
Posted by strawberrypatches at 14:42 No comments:

No sunshine? - I'll make my own bright day

It has been sunny some days but somehow the weekends seem to be dull. It's bright when I look out of my office window and dull when I want to take photos. But I have so much colour.... 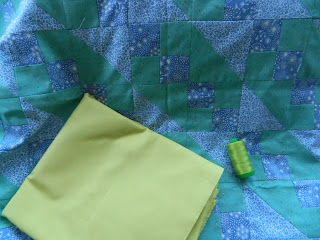 Did I mention I like Lime Green?  This is going to be the backing for my Blue Jacob Quilt 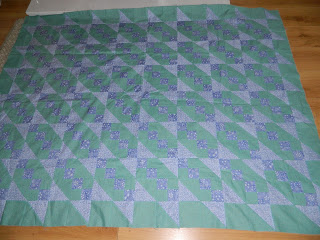 I've let myself be persuaded to machine quilt it and I'm not looking forward to it but onward and upward. If you don't try and all that.  I've machine quilted before and never been that happy with the results but I'm giving it another try. I'll get going the week after next as I'm taking half term off.  I didn't used to record my holidays and now I do, I realise that I was never taking enough - for the past ten years I've probably lost 20 weeks worth of holidays. Silly me.

I have started on a pattern for a baby quilt.  It's a chevron pattern but made from rectangles rather than half square triangles. 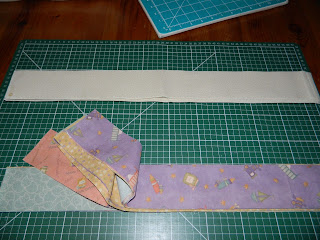 I had a bundle of four fat quarters from way back when (actually some of the fabric has faded). Its called Oh Baby by Sandy Gervais. 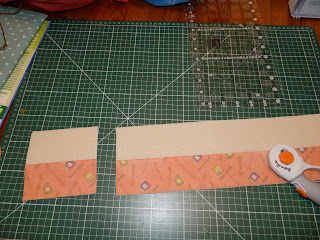 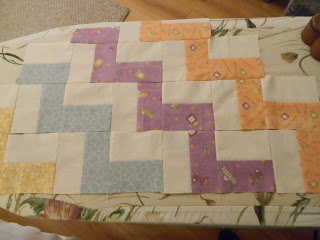 Then sew the squares together to make a two- unit patch. 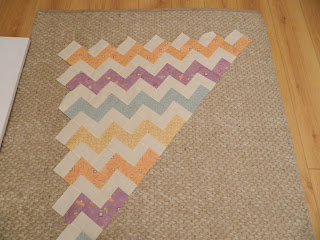 You build the units together in diagonal rows starting with a single unit and adding to either side on each row.  I couldn't get my head round it at first but have managed to make enough sense to write a little pattern. 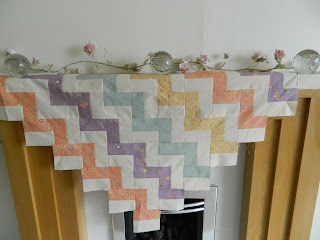 This is the top half way through. 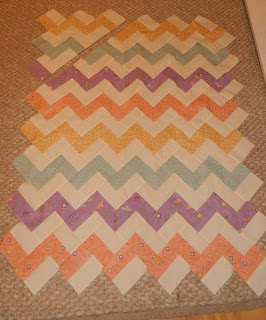 And this is it with just the corner to sew on - I apologise for the changing colours - some pictures are taken in natural light and some with a flash. 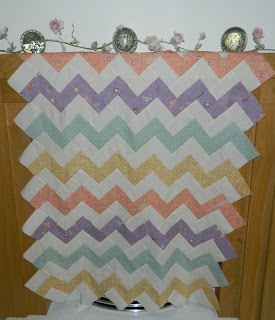 So this is waiting to have the pointy bits trimmed off.  I think it's going to be about 30" x 40" so I'll need to put some sort of border on - haven't decided what yet. I haven't got any more of the coloured fabric and it's quite old so I can't find any in the shops.  There's an odd bit on eBay but not enough for a border. I'll have to get my thinking cap on.

Will had a great time in Norway and brought me back a little hand carved spoon. 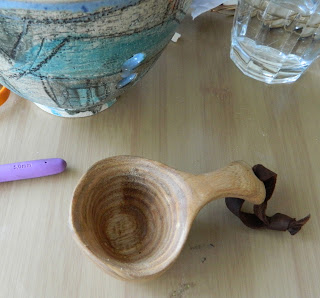 It's handy for putting stitch markers in. 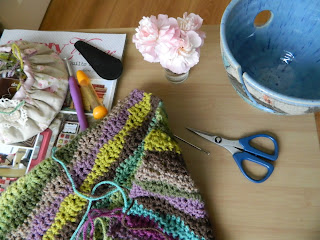 I'm still using them for the Moorland Blanket.  I'm just coming up to the end of Part Two and Part 6 has just been published. So whilst Lucy is flying among the clouds I'm still tip-toeing though the heather. I'm loving it.

I've not been doing a huge amount of baking recently 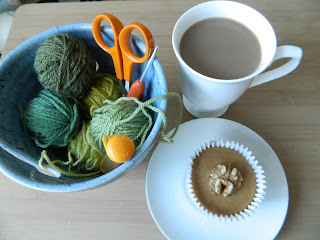 A little coffee and walnut cake 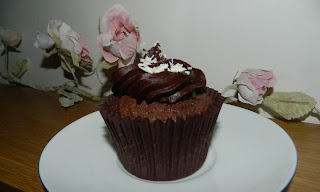 Some chocolate and raspberry cupcakes (I use yoghurt to keep the cakes moist and only had raspberry yoghurt in the fridge!)

I burnt some jam tart quite spectacularly last week. Later this afternoon I'm getting my baking head on - what will it be I wonder? I'll remember to put the timer on whatever I cook.

I've been commissioned to do a couple of little painting projects.  One for a fiftieth birthday card 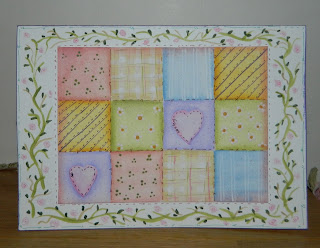 I painted a 'quilt' on to water colour paper and then stuck that to some card.  I meant to do it 'portrait' but I  painted the hearts on 'landscape' before I realised.

The next task (for this afternoon while I watch the Six Nations) is a little heart for a friend at work to give her husband for Valentine's Day.

Will is in Jedburgh this weekend with Alex and I expect they may have as much snow as they did in Norway judging by the weather forecast on the television.  It's still raining here - hasn't stopped since Friday - just so dull outside.  I'm so glad I have lots of bright things to work with whilst I am indoors.

Before I start on those lovely things there's a laundry basket full of ironing with my name on it. Until next time, be well and safe.