After a quiet Friday at work I was looking forward to an even quieter weekend.  John and Steph are away in Tenerife and Will went out at 9.30 yesterday and didn't come back until sometime after midnight (I think).  I got a video call from John on Wednesday night and had a 'look' round their apartment. There were two naked boys lolling about after a day on the beach (Ben and Max) - John was fully clothed!  How different from the holiday communication when I went with them at that age.  We had to find a shop that sold phone cards (at vast cost)  and then ring to say we had arrived safely - that was about it.

Yesterday I tidied, washed, dusted and vacuumed, then settled down, with the fire on very low because it was cool and gloomy yesterday, to quilt until I could quilt no longer. I have to say it was nice not having one son saying "it's cold in here" and the other one saying "it's hot in here". Guess which one works outdoors!  Will spends most of his time at work outside (or on a tractor) and then most of his free time outside either working on his car or bike, or building something in the garden. 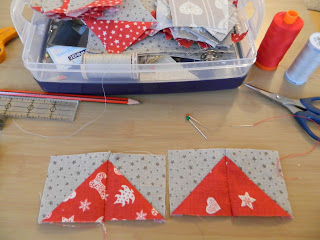 I had already sewn together a quantity of half square triangles at class on Thursday night.  Everyone was busy making things and only needed a light touch on the teacher front. I took some pear and almond frangipane squares and was very strong willed - not a crumb passed my lips.  Countdown to Christmas diet is still on track. 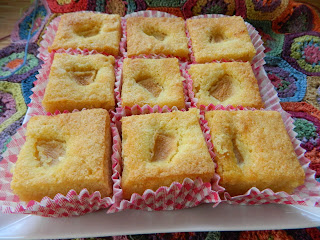 I used some half square triangles to make flying geese because we were talking about 'no waste' flying geese. 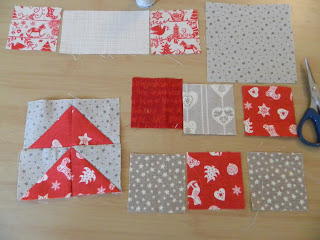 Then I laid out pieces for the top section of a second version of my 'Making Merry' quilt. 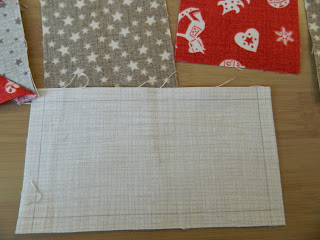 I drew lines for the seam allowances on every piece 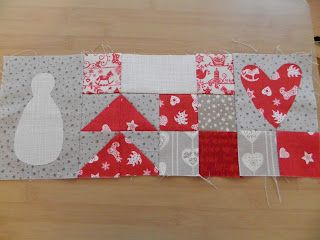 And sewed them together, 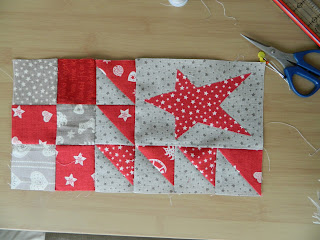 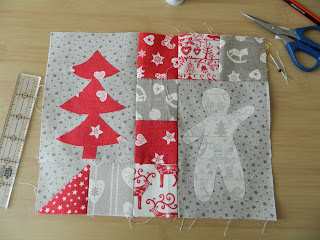 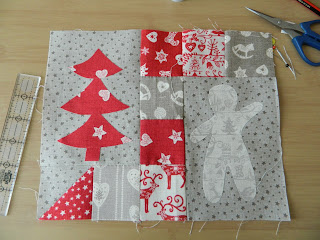 Until I had every part ready to assemble 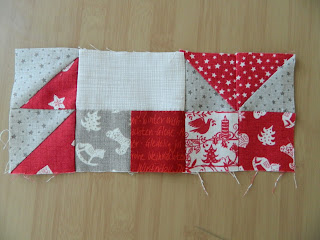 I tried to make sure that no two similar pieces touched, and still had to unpick some.... 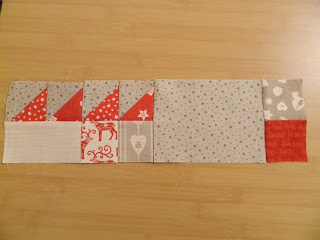 The last pic was taken later when I had to turn the lights on but I was determined to finish this part last night.

I didn't have to cook an evening meal so I just kept going until bed time.

Bit the same today. I had a half hour Skype conversation with John and Steph. Then I sewed the borders on to the appliqued quilt (by machine this time) and sandwiched it.  I got my quilting bits and pieces out ready. 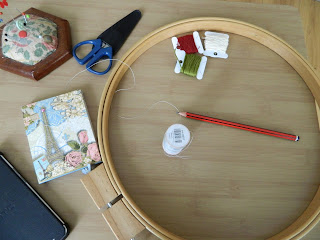 But then I remembered I wanted to finish my Autumn Leaf block.  I decided to make a table topper for a little coffee table. 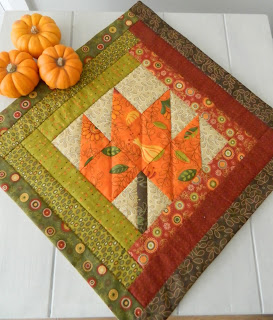 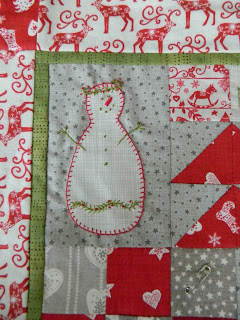 I much prefer the appliqued version although I still find it hard to work with a limited palette.  This one is destined for Steph.  I'll reveal all when it's done.

So now I am sitting with my hand on an ice pack and waiting for the American F1to start, weather permitting. They had 8" of rain yesterday. There's a delicious smell of roasting pork wafting in from the kitchen. The house is quiet and tidy for a change, I love it.

I'm taking two days off next week and have a huge list of things to do, which I know I will not get through but I don't want to waste any precious time.  When I say I have a huge list to do, I don't just mean things in the house and chores, I mean visiting my lovely friend in Whitley Bay and stitching and, hopefully, painting on the Hill.  I might take a stroll along the beach if the weather is kind. The fresh sea air is a wonderful tonic. We have our Christmas Fair at school at the end of November and I am busy making things for that too. This peaceful weekend has been just what I need.


Posted by strawberrypatches at 18:00 No comments:

Firstly sorry about the quiet two weeks. So busy at work still but I'm hoping to take three days off during half term just to recharge the batteries. I've had full (baby-full) weekends and have had hardly any time to sew.  That and my poor sore hand have severely curtailed my handicrafts.

I had my hand strapped up for a few days to stop me over-extending it but I could still crochet. So I did. Using some of my new yarn I made a few more hexagons. 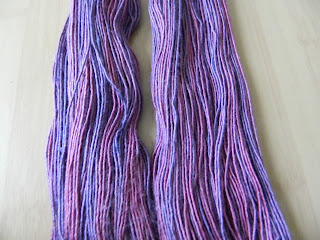 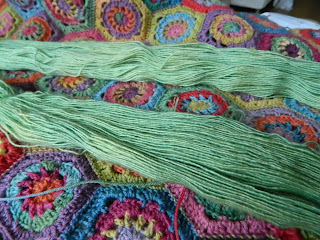 I am just so in love with this yarn - it is a joy to work with. 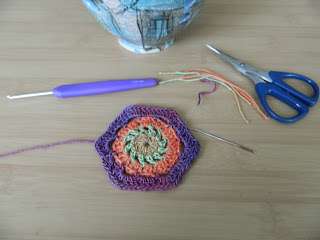 This is my blankie so far: 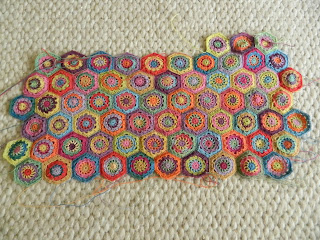 It will be at least 20 hexagons wide and about 25 or so long so there is still at lot of work but it is a labour of love.

I managed to get the quilting finished on the Christmas Wallhanging 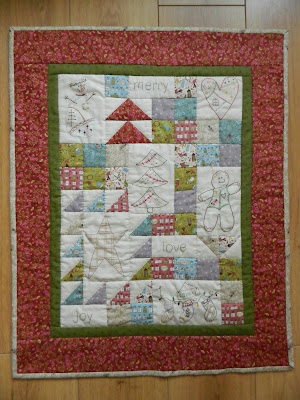 The pattern is written - I just have to make the cover and it will be for sale in time to make it for Christmas.  I've just started an appliquéd version but had visitors this afternoon so it's still in pieces.  The light has been so poor that I haven't been able to get a good shot so you can't see all the little stitchery pieces very well.

During the week I wrote the instructions for a new block.  I made the maple leaf in class this week 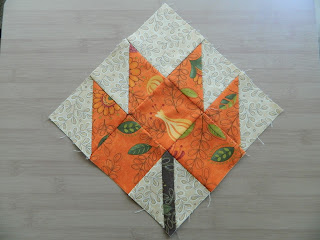 Our cake break  was (part of) a prize winning cake made by one of our cleaners at school. She used to work in a bakery and quite frankly she should take this up full time. 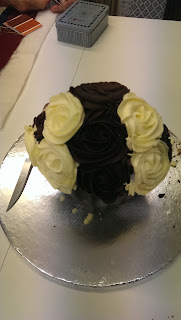 It had a nutella core.Unfortunately I am on a countdown to Christmas diet and couldn't try it but it looked (and smelled) gorgeous.

I decided to make the maple leaf block (9") a bit larger. 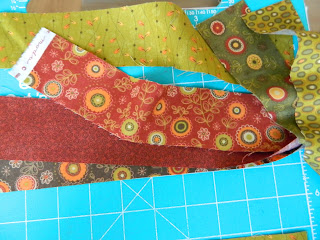 So I cut some strips and added them, log cabin style to the block. 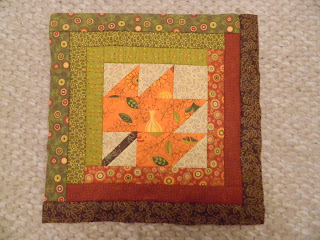 Now it's 18" square.  It could be a cushion front but I think I will turn it into a table topper. The fabric is from the Hallo Fall range by Sandy Gervais. There's lots of gorgeous oranges in it.

So my butterfly brain has leapt from project to project this weekend.  I love it!

Just to finish with a smile  - a picture of Ben blowing out his birthday candles - ahh. He didn't seem too traumatised about Peppa Pig blazing away on the floor.  He also didn't notice that she didn't have any legs.  They were made like cake pops, using cake crumbs and buttercream and then moulded into shapes. William remarked that the 'truffle things' in the fridge were 'lush'. Yes, he had eaten her arms and legs. Luckily he had left the ears and I managed to make some arms with left over crumbs. 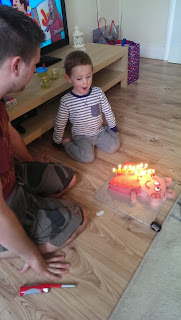 .....and Max who bounced himself to sleep in his little sling. Double ahh. He just smiles all the time, except of course when he's sleeping. I can't believe how big he is.  He was born on 3rd June - less than five months ago and he's in 9-12 months clothes.... which are a bit tight. Ben was such a skinny little thing when he was that age. 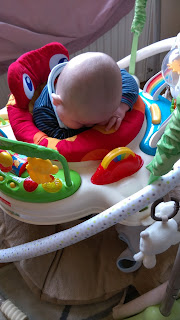 Maybe next week I will have some pictures to show you of the appliquéd Christmas Hanging. Or maybe my butterfly brain will have flitted to other things. However I need to knuckle down and get ready for work tomorrow - the endless merry-go-round keeps on going.

John and Steph are taking their little family off to Tenerife for a week for a well earned rest. It'll be quiet without them and I'll miss them but - whoop whoop the (F1) weekend is all mine!


Posted by strawberrypatches at 19:48 2 comments: