After dark - after eight

I think I can happily say I've got the black background quilt out of my system. Goodness it was hard going on my poor eyes. I do like the effect but - never again! 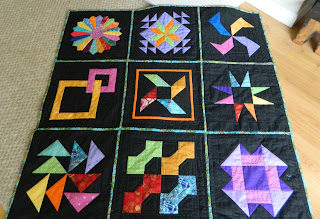 The back of the quilt is as bright. 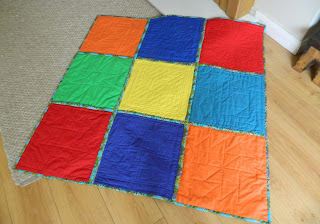 The trouble is I'm not that keen on quilt as you go blocks. It seems like a good idea at the time but then when you try to match them up it never quite goes to plan, no matter how identical they are when you trim them. This was going to be a four by four quilt but I ran out of the black fabric - probably had enough for twelve blocks but nine was as far as I could bear.  Marilyn at the quilt class felt the same.  The photo doesn't do the quilt justice colour wise - her background is deep rich purple and looks gorgeous.   She is a very neat worker too. 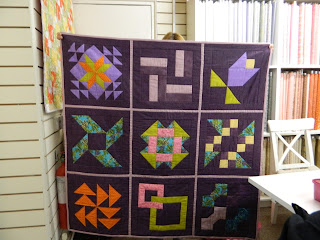 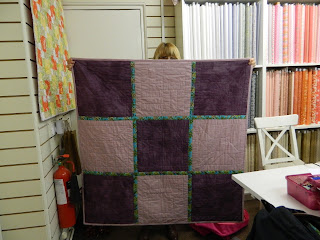 The other lady that is doing the same project is doing twelve blocks - her colour scheme is totally different - I'll  post that when she's done.

I had an urge for after eight mints this week so decided to do some mint choc cupcakes. 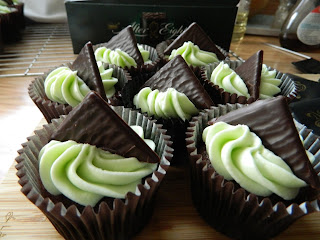 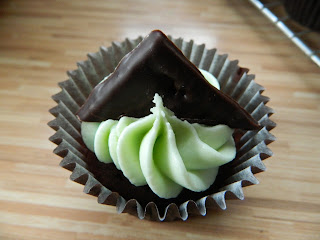 It's probably not my favourite combination but I run out of ideas sometimes (well quite a lot of the time really) and I haven't done this before.  I thought I might go on a sweet shop cupcake theme, although the time for pumpkin pie is looming - should it be pumpkin pie flavoured cupcakes or pumpkin pie itself?

I'm trying to make the most of the light as the nights draw in - I know we get an hour of light at the end of October but that eats into my morning time more.  It's time to get the crochet out which is a little easier on the eyes.

Steph is in full wedding planning mode at the moment.  They have booked a villa in Spain in June.  At the moment though my mind is on stitcheries and all things 'seasonal'.  I have so many things floating around in my head that it's a real skill to just choose one or two and do them.  Sometimes I end up doing lots of thinking and no doing.  There's just not enough time is there?  At the moment I just feel exhausted and am looking forward to a week off work at the beginning of November. Apart from the Easter bank holidays and May days I haven't had a day off since Christmas last year. A week will seem like a long time.
Posted by strawberrypatches at 17:13 No comments:

Aren't the minds of games designers marvelous? For years we have been trying to get cameras with more and more pixels for a sharper picture.  To the point of it becoming bragging rights on phones - mine's got 22 billion pixels, that's nothing,  mine has 22 billion and one.... and yet one of the most popular games (Minecraft) is made to look like extra large pixels. A boring blocky landscape that a four year old can build. That did make for an easy birthday cake though for Ben's fifth birthday yesterday. 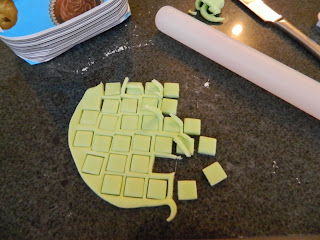 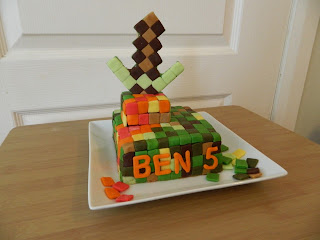 It was so simple to assemble - a building block covered in greens and browns with another block on top with reds oranges and yellows to represent a lava flow (or yava as Ben calls it).  On top is the pickaxe used to cut  blocks. (or Pigaxe as Ben calls it - he has a language of his own).  Ben and Grace fought over the pigaxe but they settled for one to have the handle and the other the blade. 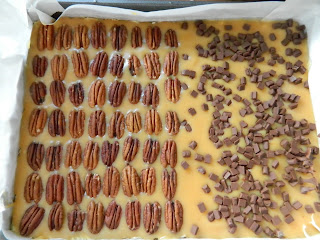 I also made some pecan shortbread this week - although  I had to use Choc Chips on half the mixture because nuts make Will gag.  He took some down to Alex's, some went to the Thursday night Quilt class and the rest went to work. It was gone before lunch, in fact one of the osteopaths had a piece for breakfast. Health Care professionals eh?

So not much on the stitching front this week.  I trimmed all the blocks I made for the Quilt As You Go demo quilt. I won't be doing another black background for a while. 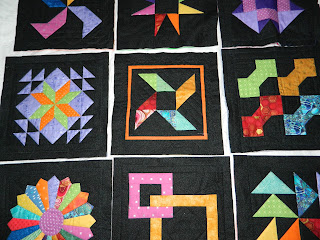 The one in the centre was a mistake - I made a nine inch block instead of a twelve inch block and had to add extra edging. I should be to get this assembled this week, on my strange day off. My weekends are Sundays and Wednesdays. It's taking some getting used to.

The baby quilt was delivered this week - she loved it thank goodness. I was a bit worried it would be too bright. She has ordered a Christmas stocking for the baby which I can make but not assemble because she is not announcing the baby's name until he is born. I hope it's not a really long one!

So I need to go and get ready for work now. It's blowing a gale outside - plays havoc with my hair.  I take Ben to school on a Monday and then get to work for 10.

Until next time. B xx

Posted by strawberrypatches at 07:32 No comments: