Turn on the broadband Gladys

Couldn't get to blog last week but I didn't notice straight away that Ben had switched off the router. It took so long to reset it was past my bedtime so apologies to those who checked by and found no news.

We had a lovely time at the quilt class last Thursday. Everyone was working away at their chosen blocks and it was good to see some ladies tweaking the designs to suit themselves. Quilting is about what you like and what you find enjoyable after all.

Sometimes basic techniques come first and sometimes the design is more important and the techniques are perfected later.  There is no right or wrong way - some things work better than others - it's all part of the journey.

We had Lemon Yoghurt Bars by Donna Hay at the break and my favourite standby for busy times - palmiers. 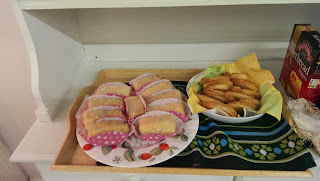 A sheet of puff pastry covered in sugar, rolled up then sliced and baked.  If you get fresh puff pastry you can bake half and freeze some for later. Sometimes I substitute grated parmesan for the sugar for a lovely savoury bikkie. 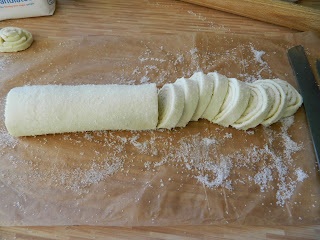 A lovely parcel was waiting for me on Thursday - a Knit Pro Symfonie circular needle.  I started the collar but it looks quite a bit smaller than the picture. 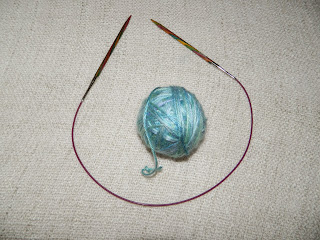 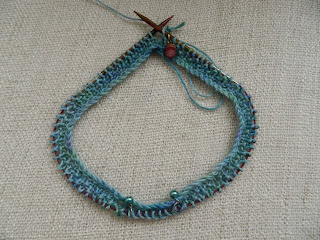 I didn't discover until I finished it this afternoon that the cast on edge is the bit that sits round your neck so is the smaller opening. 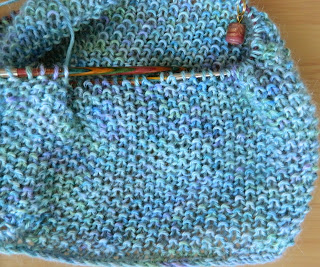 I hope you can see the lovely nuances of colour, from soft hyacinth blue through jade green and purple.  It's beautifully soft too. I'll post a pic when I have blocked it.

Bernice - you asked about binding.  I did a reply on my phone but it didn't publish so I'll point you towards the tab at the top called Square in a Square where I have put a photo tutorial with instructions for binding at the end.  If I want to make a wide binding I usually cut a 3" strip and fold it in half with the wrong sides together then sew it on to the quilt front (in your case the blanket) front with a generous half inch seam, possibly three quarter inch seam depending on the thickness of the blanket. You can also use wide satin ribbon which is lovely for a baby - they seem to like the feel of satin.

When I was reading the Little Cotton Rabbits Blog I noticed Julie has a little block with 'Knit' on the top bar.  I painted a block a little while ago with a beehive on but I thought it would be nice to do something like Julie's. So these two are on their way. 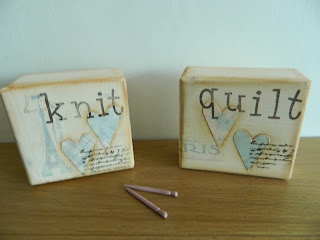 Can you see the little tiny pair of knitting needles that Sandra gave me? I am going to do a tiny piece of knitting and a tiny little quilt to put on the blocks.  They are only about 10cm square though so they really will have to be small.  I need to do another two now for crochet and painting, I suppose I should do one for baking too!  How many blocks would you need?

Now though my thoughts are turning to Christmas designs.  Hilary has booked us for a Christmas stocking workshop at High Street Quilting on 7th December.  I will be finishing the designs this week as I have a couple of days off. 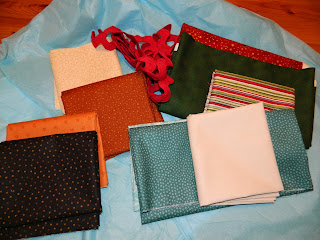 I'll be doing a couple of traditional Christmas colours and a couple of lighter colours. I have also got some sketches ready for a Cookie Cutter Swag.  First there is the small matter of Halloween this Thursday which happens to coincide with our next quilt class - so what do you reckon - should it be trick or treat?

Posted by strawberrypatches at 16:03 2 comments:

It's been a long week at work and I've had a stinking cold.  I get them about once every five or six years so I shouldn't complain. I used to think I would volunteer for those research thingies because I so rarely get colds.  I've had flu once - when I was about 20.  All I can remember is my mother lifting a cup of water to my lips - I think I lost about 3 or 4 days. Trouble is you just keep going when you should really give in. I hate it when you feel like your eyes are going to pop out of their sockets every time you cough.  I gave in yesterday afternoon and slept for about four hours.  On Thursday my uncle rang to say he would be passing our house on the way to Edinburgh.  He had dinner with my brother on Friday and then came over on Saturday morning. Here are my two lovely boys, pumpkin Ben and Steph with Ben's Great Great Uncle Greg. 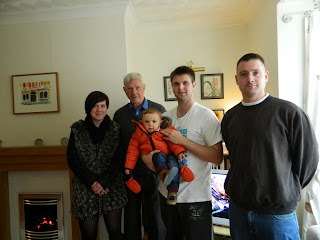 I made a whimpering phone call to John who made some lovely butternut squash soup with a chestnut and bacon garnish.  We had walnut bread with that and a Tarte Tatin with vanilla yoghurt for pud.  Very autumnal and a bit like the leaves - splendour for such a short time. 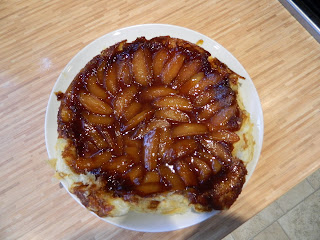 We have decided to spend Uncle Greg's 80th birthday next May in Ireland.  We have spent many a happy holiday celebrating family birthdays in big rented houses - mostly in France and usually a dozen or so of us.  It's been a while since we last celebrated someone's big birthday so I'm really looking forward to that.

There was nothing on the agenda today so I settled down for a nice quiet time.  I watched the Japanese Grand Prix.  John came round for quiet brunch and I got my wool out ready to knit. They hadn't got much sleep last night so they dispersed to their Mammy's houses for rest and recuperation. 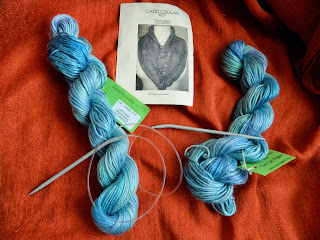 Unfortunately my 4.50mm circular needle is 80cm and the pattern called for a 60cm. Poop. It seems I have every size of double pointed needle from 2.00mm to 6.00mm except 4.50mm. Deep frustration. Double poop. It will have to wait until I can borrow or buy the right size.
Half way through the afternoon Steph rang to say that Ben had taken his first steps!  They came round but he wouldn't perform again.  Her little brother Matthew came with them and asked if he could make cakes.  It was like Armegeddon in the kitchen and he ate about a quarter of the mix before we could get it in the tins.  Ben switched the washing machine off half way through a cycle and the tumble dryer is on the blink.  The condenser is leaking. It has actually stopped raining but it's too late to hang anything out now.  I still have four loads of washing and it's nearly 6pm.

There has been no sewing or painting this weekend so I have nothing to show and I find myself wondering just what happened to the past two days. So I have done what any good Brit would do under the circumstances - made a cup of tea. So here I am just about to tuck into Matthew's chocolate cake. 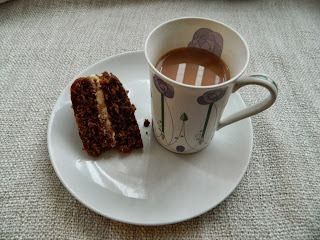 Can you see the reflection of the vertical blinds in in tea?  I love pictures inside pictures. The dishwasher, washing machine and tumble dryer (with a bucket underneath) are all working their little socks off.  There's a chicken roasting in the oven (together with potatoes, carrots and broccoli - only two tins to wash).  Another sip of tea and I'll be revived and ready to start the ironing. In twelve hours I'll be getting up for another week at work.  Let's hope it's a bit quieter!  Whatever your week brings I hope it's a good one.
Posted by strawberrypatches at 18:20 2 comments:

Roses again-but I just love them

Ben was one year old on Tuesday - I can hardly believe it.  The house was full of noise - I wonder why?  It was also jammed to the rafters with toys and clothes for him.  Steph's little brother (aged 6) and cousin (aged 3) wanted to play with everything and insisted on helping him undo all the wrapping paper. 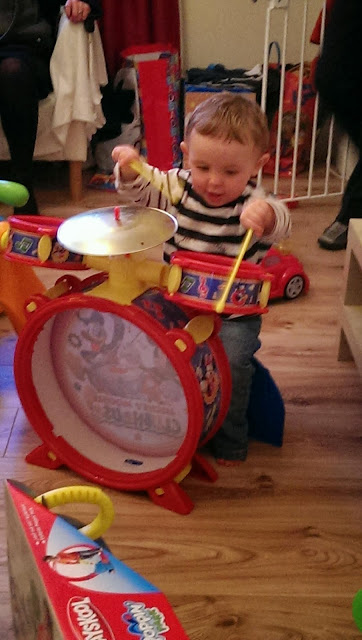 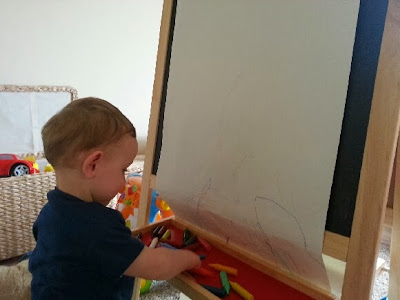 We had our first session of Mavis and Gladys at High Street Quilting on Thursday.  I'm looking forward to seeing all the lovely stitching the ladies produce.  There was quite a mixture of abilities, from the complete beginner to some more experienced stitchers. Lovely Karen had brought some designs. She scanned the fabric and printed a little sample so that she could see what the finished blocks would look like.  I always want to be that organised but never quite manage.

I made two dozen cupcakes but left a few for the boys.  It was dark when I iced them so I decided to wait until the lighter morning but there wasn't much left to photo. 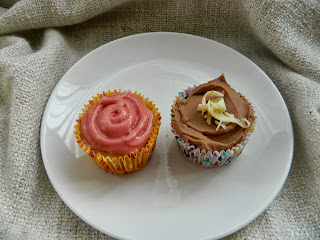 I'm afraid I've been a bit of an idle girl this weekend so don't have much to show.  I had bought some little bottles in a basket from Laura Ashley last week.  I went to the shop next door early last Sunday thinking I would be safe because Laura Ashley wouldn't be open but,  as I walked past - swish - the doors opened and my feet marched in.  I came out with a duvet cover, pillow cases and a little basket with three bottles.  I actually needed the duvet cover but probably not right now.

Anyhoo. I was going to put some lavender in the little bottles but the urge to do some more roses overcame me this morning. I spent most of the Korean Grand Prix trying to wind the yarn into a ball. Got a bit tangled.

It was a good race though, interesting and full of goings on. Apart from Vettel leading most of the way of course. Luckily the TV company didn't focus on him at all. I stopped watching F1 when Michael Schumaker dominated. It was so boring. It's a bit like deja vu with Vettel. 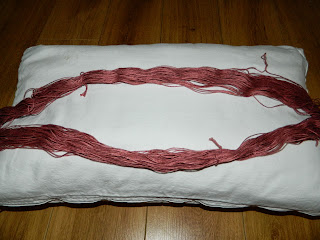 The roses I have made previously were a bit too small so I added some stitches  to the design to make them bigger. 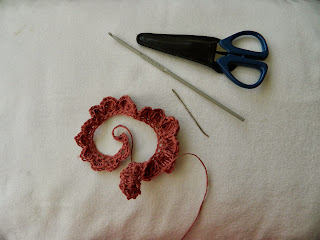 They don't take long - about 20-30 minutes. It always amazes me how beautiful they look. (I know - I'm easily pleased) 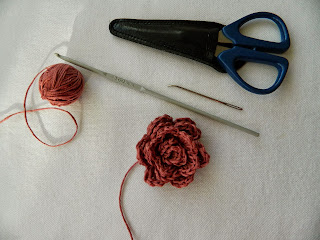 I added some leaves and a stem, 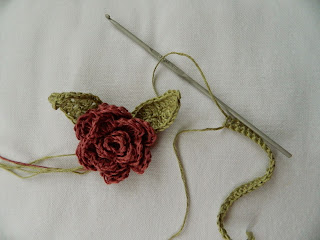 And then used some florist's wire to stiffen the stem. 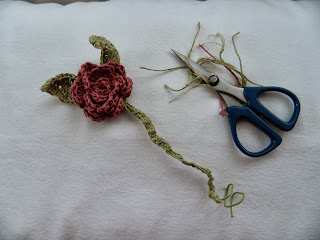 I made three and put them in the bottles. Maybe not high end interior design but they make me smile when I look at them. 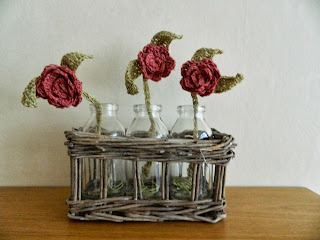 Apart from that I haven't done much - just the essentials, cleaned and fed the hens although I left the weeds in my leeks and onions.  My purple carrots got an attack of root fly which is very sad because they look so pretty.  If there's any decent ones left I will photo them for a future post.

Tomorrow I am going to a conference in London.  I leave on the 5.38am train from Durham and get back about 9pm. Oh joy.  I think I'll take a little something to pass away the six hours I will be spending on the train. A sleeping tablet maybe!

Now I'm going to see if there is anything lurking in the fridge for tea. I'm not holding out a great deal of hope though.
Posted by strawberrypatches at 19:21 2 comments: