What a week! I don't know why the first week of the Autumn Term always comes as a shock to the system but this was no exception - I'm so glad it was only four days long. But now I have had a quiet weekend to recharge the batteries.  A bit of stitching, a bit of pattern writing, some crochet, not much housework and the Italian Grand Prix.  Will has tidied the sun lounge (or should I say car workshop?) and I am at peace.

First an update on Flossie: 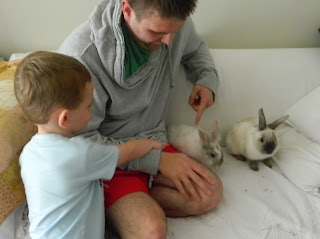 Yes there are two rabbits. Someone contacted us to ask if we wanted to give a home to their little rabbit as they could not look after it.  They said it was a girl, called Sugar..... Will wanted to get a little friend for Flossie so he went and picked her up.  She was incredibly skinny and tiny and quite scruffy.  She looked like a girl and was quite a bit smaller than Flossie.  We took them both up to the vets for a check and she is a boy - quite obviously a boy when you know where to look. By then they had been together for two days. The upshot is they are both going in to be neutered (at vast expense). But Scruffy is too cute for words and Flossie, after some initial posturing is quite happy with her new companion. Ben was totally confused and thought they were both called Flossie.  So now the new rabbit is no longer called Sugar but Scruffy. There is hay everywhere as they are brought in for a good night cuddle, actually he is sitting on my lap now.  It's like living in a farmyard - happily it smells better!

We had a lovely sunset the other night but sadly it poured the next day. This was the view to the west- 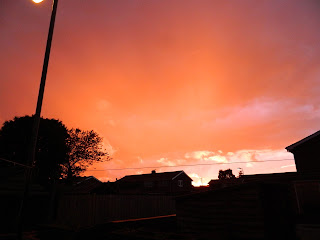 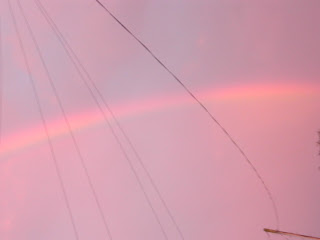 and this to the east - a lovely rainbow - my phone doesn't pick the colours out well but it was beautiful and ephemeral.


Yesterday I had a strange but very peaceful day.  I was receptionist at the clinic for John in the morning and then, because he had my car and was off to a rugby match to physio for them, instead of driving him there and going back home,  I decided to stay in the clinic and do a bit of pattern writing. I set BBC iPlayer away and caught up on the Bake-Off and had a very pleasant afternoon!

This morning I had a quick practice crochet before I set off for a lightning visit to the supermarket (the yarn is beckoning to me and I'm desperately holding off until my patchwork projects are further forward). 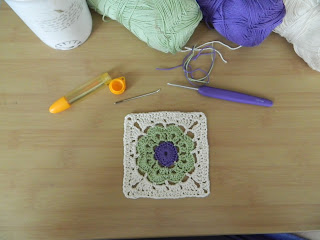 I am using Patons Cotton 4 ply.  It is really good value for money and I like to use it for experimenting with designs as it gives a lovely crisp finish although their range colours are not really my thing. This is a Maybelle Square from Rose Valley. I would love to make this from linen - maybe a throw for my bed or a cloth for the chest of drawers. Quince and Co make a lovely yarn but I couldn't afford to make a full throw from this (I can but dream).

Watching the Grand Prix this afternoon I finished the stitcheries for my new Christmas Wallhanging.  I just need to layer it up now and finish writing the instructions. 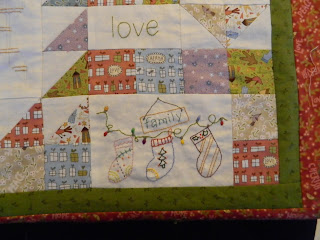 I got a lovely book this week - I can't remember where I saw it but it is a second hand book published in the '70s. 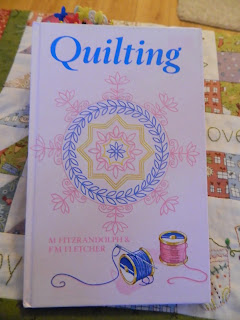 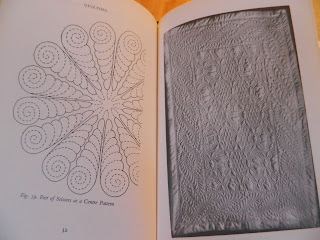 There are some lovely designs in it which are definitely going to find their way into my work somehow.  £6.75 well spent.

So, a few little chores and I will be ready for the week ahead - bring it on!
Posted by strawberrypatches at 20:56