What a week!  Poor little Max had had a severe tummy bug and had to be admitted to hospital for two days.  Poor little mite just kept being sick - couldn't keep anything down. Coupled with a really bad dose of diarrhoea which left him dehydrated he was in great discomfort.  Luckily he's back home and on the road to recovery - lucky too that he is quite a chunky boy so he had something to fall back on.  Everyone is worn out.  Ben had a dose of jippy tummy on holiday but we're not sure if that was the same bug.  He came over this afternoon to show me his new coat. 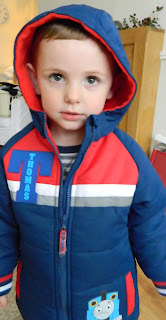 He loves Thomas the Tank Engine as much is his Daddy and Uncle Will did when they were little and now Ben is eating from the little dishes that they used to eat from!

Well I haven't done a great deal of crafting this weekend because I 'lost' a whole day sorting out birthday presents for my two lovely boys and covering at the clinic while Steph nursed her poorly Max.

Yesterday afternoon and this afternoon I have been happily sorting through my Stylecraft yarn ready for the Attic 24 crochet along Part 2.  I had already made the centre squares: 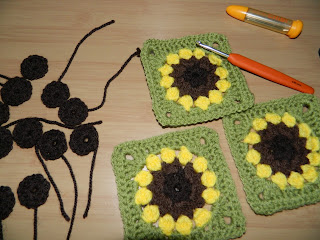 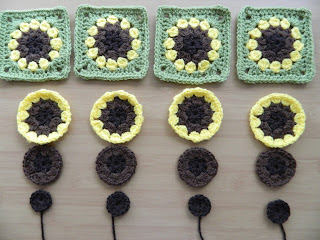 Some taken in bad daylight and some with a flash.  (The flash pictures are truer colours). I'm leaving some at the sunflower centre stage because I am going on a long train journey next week so I wanted something small to take with me. I completed eight centre squares.

Last night I sorted out the colours I wanted to use - autumny shades - my favourites! 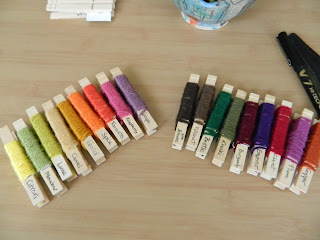 Then I wound some yarn into cakes. I may have to get some more 'Grape' and 'Camel' but should have enough of the other colours.  I think I only bought five colours in the end because I had plenty left from my blanket last year. 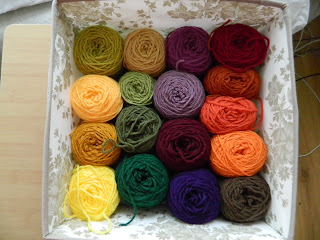 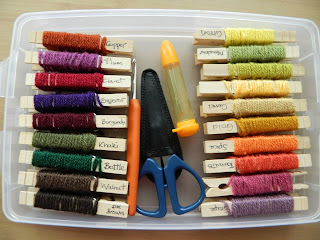 I've put the little colour pegs into a box so that everything is ready to go.... I think I'll put the colours in order in the little box as I do each square.

Late this afternoon I made a start - the anticipation has been overwhelming!

I've made a start but (tssk, I can't help myself) I'm doing the pattern slightly different from Lucy's.  She is using a variation of the original Log Cabin Quilt Block (Courthouse Steps) but I wanted to used the original setting.  I'm going to set it out to make an eight pointed star when all the blocks are finished. Instead of using 16 colours (plus the centre square) in each block I will only be using eight colours.  This is where I'm up to: 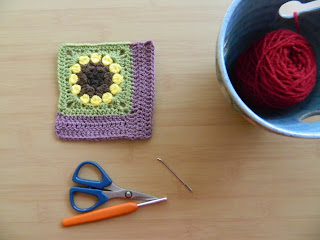 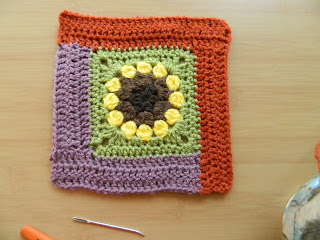 There'll be more before I go to bed because I can't keep my hands away from the yarn!

There hasn't been a huge pile of clothes to wash this week.  Much more than in the summer but much less than in the deep winter.  What I have noticed is what I call double dip sock weather.  When it gets cold Will wears two pairs of socks.  In the deepest winter weather he wears three pairs. I got him some long johns one year for a joke and he immediately asked for more. When it gets to Triple Dip sock weather you know it's time to break out the long johns. That makes for a lot of washing! 21 pairs of work socks every week. Let's hope we don't have a triple dip winter eh?