I felt a bit duff on New Year's Day - just put it down to the to and fro of the Christmas season. But Oh boy was I wrong. The Flu - first time since I was a teenager and that was some decades ago! I felt so poorly I could have literally given up the ghost.  Here we are three weeks into the New Year and I feel as weak as a kitten. Still coughing but so much better. So much better.  It has given me a real fright.  I've always had good health and could shake off minor ailments without a thought. Not that I really suffered with anything apart from the odd dicky tummy or runny nose. Now I realise how lucky I have been with my health.  Not that I didn't appreciate it before but I don't want to feel like that again - ever!

I've picked up things listlessly and put them down again. A couple of rows of crochet. A few stitches on the quilt. But now I am ready to face the world and want to catch up with what I've missed. Although I am still lacking in energy, I want to get going and put the beginning of 2018 into the bin. Consequently I have very little to tell you since the last post. But onward and upward Biggles!


So I've been working on the first block of our new Spring Quilt as You Go. This is called Grape Basket. 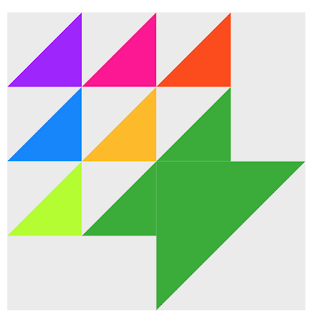 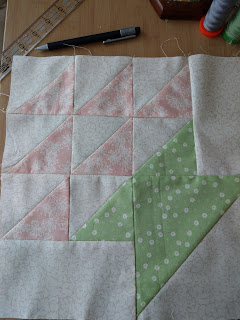 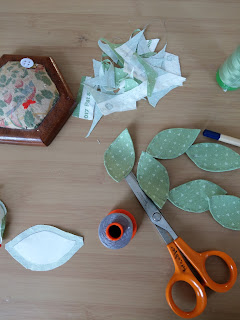 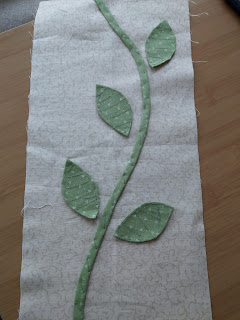 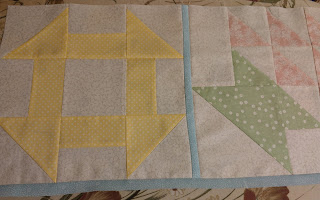 Another block added today - Hole in the Barn Door. So this is the basis of the new quilt.  With the turquoise sashing. I'm not doing Quilt as you Go for this although it's designed to be done that way as the ladies requested.  I personally don't like the back of QAYG designs or the drape with its tendency  to fall into the component squares and shapes. Obviously it's a bit more difficult to handle, especially if you don't use a hoop to quilt.

We had chocolate caramel core cupcakes at the class this week. Very sweet! 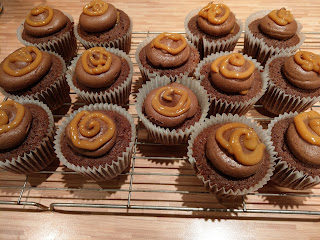 Will has been cooking too - in batches which go in the freezer. 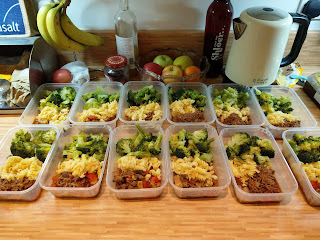 I've got some broth and some Boeuf Bourguignon on the go at the moment.  Will is  at Alex's (and has been to Alex's Dad's house in Southampton this weekend.)  They are back in Lancashire but he has to make the trip over the A66 tonight and it has been snowing here this afternoon for about an hour (maybe an inch or so) but seems to have stopped. I'll be keeping an eye on the travel sites to make sure his route is open.

John and Steph went out for a meal last night so I was baby-sitting.  They are so good that it is never a chore. Ben was happily playing on the iPad and Max was running round in circles when I got there.  I get loads of cuddles because they are so affectionate. We all went up to bed at the same time (although I wasn't staying) Max wasn't sleepy but Ben went straight off.  Daddy and Mammy got back at 10pm and Daddy carried him back to his own bed. Bad planning there as I had a bagful of crochet which was not touched,  but then I can crochet when they're all grown can't I? I left him cuddling Max down.  They weren't very impressed with the restaurant but appreciated the time out.

So now I am going to appliqué the leaves and stems and maybe prepare a few little flowers.  There's not much ironing to do, for which I'm grateful!  I'll put the hens to bed for the night as soon as it is dark and then cuddle down with some crochet in front of the fire.  The satellite signal is going a bit haywire so I'm glad I've got stuff recorded.  Until next time - much love to you all.