I was asked to make two elf stockings for a friend's first grandchild, one for home and one for the said grandparents (the same baby as the rather bright baby quilt I made a little while ago).  They wanted them the same but different. 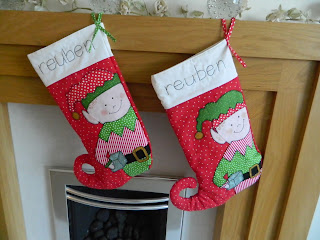 I enjoyed doing a slightly different design - most of mine have snowmen and trees and Father Christmas designs.  Not sure about the name, but I know that's a matter of personal preference.

However when my Best Friend became a grandmother for the first time on 16th December and sent me a picture of the minutes old baby Harry with his little Christmas Pudding hat,  I knew exactly what design I wanted and spent a happy afternoon drawing out the design and cutting out and fusing the pieces. 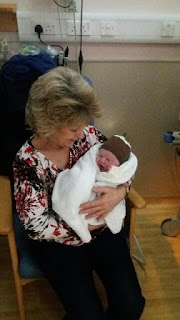 I put it in the post straight away in the hope that they will get it in time for Christmas. 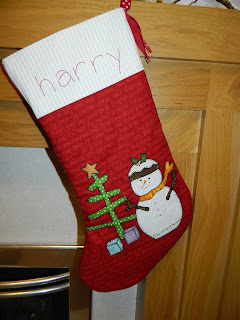 He was supposed to be born between Christmas and New Year but she was induced three weeks early because of some problem with her gall bladder. Mother and baby doing well and home safe now. 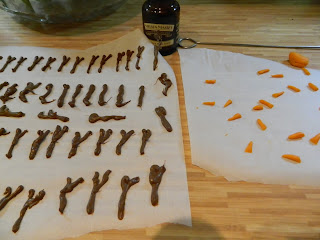 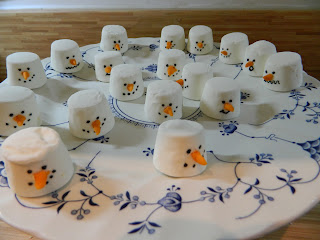 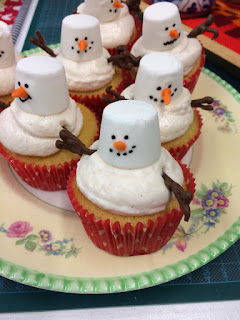 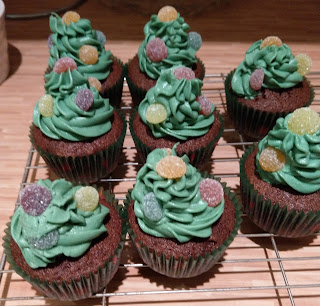 A little less topping in the New Year will be the order of the day I think.  January - the month of diets and resolutions.

As you do when there is limited time I decided to make some little stockings for people at work, seeing as this is my first Christmas at the Clinic. I love doing these little ones, which are about eight inches high. 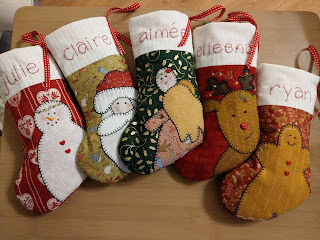 People are always very appreciative of the work you put in to these but I am always taken aback by the monetary value they place on these things. (They often say I should sell them).  We are so used to paying Far East prices for inferior goods that we have no real idea of the value of domestically produced items.  For a full sized stocking I use half a metre of fabric, plus the decoration fabric, fusible web, wadding, buttons, thread and ribbon. They take about six hours to make, very often more.  Claire from work thought I could sell one for "at least £10". That is no bad reflection on Claire, it's just what we are used to.  £10 wouldn't even cover the materials!  When you figure in the amount of time for even designing some of the images, selling them doesn't make sense.  (Some of the above designs are from Nancy Halvorsen - a designer that has inspired me for many years)

Talking about value and cost, I bought some cheese for John - Cuddy's Cave from the Cheese Farm at Blagdon in Northumberland.  It's locally made, absolutely delicious and in comparison with supermarkets, pretty expensive. I was indirectly criticised for buying it "you need to take out a mortgage".  We expect to pay so little for our food. We get rubbish - tasteless, uniform mass produced junk. I won't buy it. Period.  With my farming background I get really annoyed that we are content to buy a cheap chicken, or cheap tasteless cheese but are happy to pay the same amount for a sweet, salty, fatty burger with little thought about the production methods, or the effects on our health and the environment.  The chicken I buy costs about £7-8 but tastes gorgeous, makes Sunday lunch, sandwiches, chicken stir fry and broth. I don't waste any of it, I can't afford to and it makes me appreciate it more and I don't need to smother it in salt and other flavourings.  I actually don't spend any more on my weekly shop because of it. My mother's friend had a very apt saying - "I can't afford to buy cheap things"

Off my soap box now.

I've been making little stars for the tree - I love how quickly these come together. I made a little kit (enough for two stars) as a gift for the ladies at the quilt class. I enjoy the simplicity of the Scandi colours. Not to climb on my soapbox again - but who thought pink and turquoise represented Christmas?

I have been sitting typing here, in the morning dark (yippee we have passed the Winter Solstice), watched the sky change from pinks and azure to a bright fresh blue with the sun beaming down on a crisp winter day. I think it's about time I did some wrapping of presents, maybe with a little mince pie and a cup of hot coffee.  Just to leave you with a picture of Ben's first Nativity Play - his class were Stars. 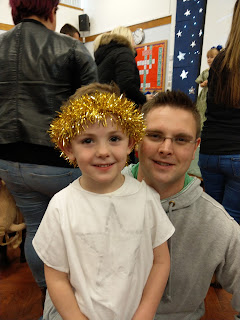 Watching him sing 'When Santa got stuck up the chimney' took me back a quarter of a century. Ben and John - two of my bright stars. How lucky I am.