Some more chooks, some more stitching, but not much

Animals shouldn't be kept as singles, except perhaps cats and dogs that have a lot of interaction with humans. When the little ginger hen died that left me with only one as Will has taken the little Silkie hens to his new house. 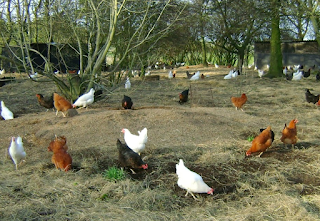 I chose a White Leghorn and a Black Rock which lay white and dark brown eggs respectively. 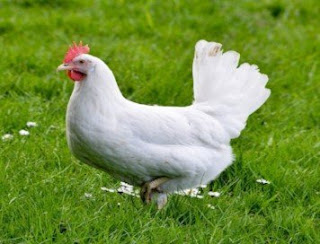 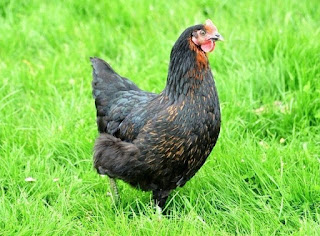 He asked if I wanted their wings clipped (like trimming toenails) but I said no they were going to be in a completely enclosed pen. Oops.

When I got home Will helped me to unload my precious cargo. The white hen jumped out of his hands and ran down to the bottom of the garden. We managed to corner her but she got into some open space, took off and landed on the garage roof from where she could spy a neighbours hens. She flew into the garden and 'mingled'. To cut a long story short we had to wait until dark when she was roosting and pick her off (she turns out to be very feisty). So now she is where she should be and I am going to clip her wings this morning. They are busy establishing their pecking order at the moment which is quite a noisy affair with much feather ruffling and some serious pecking.  They will settle down soon and I look forward to about ten eggs a week. Plus of course the pleasure of seeing these lively little creatures pecking and scratching happily for grubs. The Black Rock has the most gorgeous iridescent green/black feathers on her back, with gold speckles on her chest.

I'm suffering that time honoured state of winter blues at the moment and am finding it hard to motivate myself to do most everything each day. I feel anxious and sad and just want to curl up in bed and sleep the winter through at the moment. Hey ho it will be the Winter Solstice soon. Moods are so hard to control aren't they?

I don't know what I would do if I didn't have stitching to keep my head in that gently lovely place. I made a pattern for the class and did a sample for a Christmas Pudding Placemat. They are 10" across. 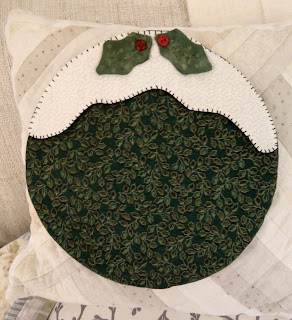 I have enough fabric to make a complete set so I thought I'd give them to Alex and Will for their new home, because, happily for me Alex likes that sort of thing. It's also spawned a few new ideas for Christmas table settings which I'll be developing over the next week.

I must, however make a little project bag for my friend which will need to be sent off this coming week too, together with the stockings that are ready to be posted. I have more orders but they are being hand delivered, which takes the pressure off a little. 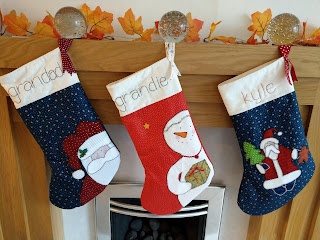 I've reached the 'solstice' on Ben's little corner to corner crochet blanket and am now working on the shortening rows. I bought six balls of variegated yarn and then just crocheted  with increases until I'd used three of the balls. It'll be about 42" square when I've finished. 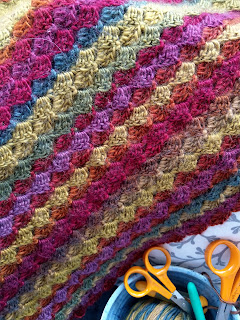 The pattern is so simple and rhythmic that I'm going to make a little triangular scarf with the silk yarn I have left over from my Linden Bee Shawl. (note to self - get the tassles done).

I went to a rugby match last Friday with my friend Janet-who-can-talk-for-England. 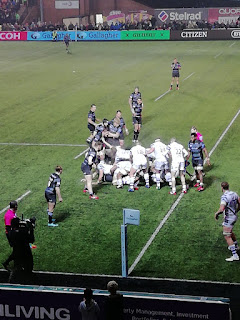 The match wasn't bad and the Newcastle Falcons won, which is good, but I managed to trip over an uneven paving stone on the way back to the car and went flying through the air, landing heavily on one knee. I managed to limp my way back to the car and could drive the car (clutch leg affected) back home via a huge detour because the A1 was closed for resurfacing. I didn't get back until midnight, way past my bedtime.  I got an ice pack from the freezer and hobbled up to bed. Luckily I didn't have any plans for the weekend and very happily it doesn't seem to have affected my back which can go click at a drop of the hat. Other than being a bit stiff everything seems to be ok.  I kept my leg elevated and watched the last F1 of the season with my crochet on my lap.

I've been watching the Attic24 for her annual Crochet-Along (I have done two of the five).  This one again looks really lovely and I happen to have most of the colours - Sweet Pea Stripes. 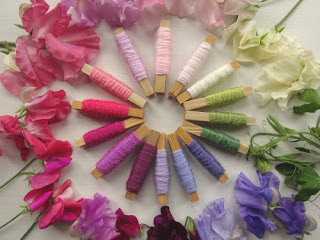 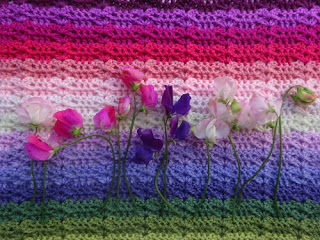 I'll have Ben's blanket finished an should also have the second little chair back blanket finished too. (Part of my Summer Crocheting) This is the first one. The second will be the same, but different if that makes sense. 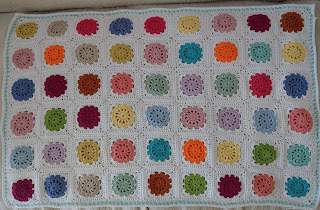 The chair will be outside my back door which faces South and I am dreaming of soaking up some rays even though the cloud is thick and the day is grey now.

But for now I am off the the shops to get a cat-litter box to use as another nesting box for the hens.
Posted by strawberrypatches at 11:36