A little dotty in my old age

A girl can never have too many dots.  To me, dotty things are jolly, a bit girly, they make me smile.  I don't have loads and loads of dotty fabric but I do enjoy buying the odd fat quarter.  I think my last dotty outing though was for Ben's Tumbling Block Quilt. 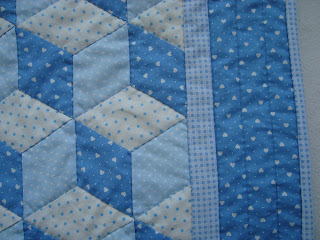 When I was blog-hopping I saw a crochet hook with a wooden dotty handle which I have filed in the recesses of my mind to keep an eye out for.  But it got me thinking that it would be quite nice to have some dotty pegs to make you smile when you hang out your washing. As I happen to have a few in my 'to do, but I don't know what or when, collection I took some to the Hill on Saturday morning.  This is the result: 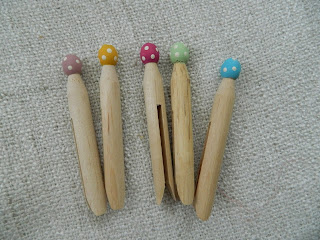 Didn't that make you smile?  Actually I painted six but one fell of and rolled under the sofa just before I took the picture.  I think I'll make a set for Steph.  They live in a flat at the moment (until next weekend!!) and they have to either tumble dry their washing or hang it on airers in the flat, or bring it up to the washing line of Mammy.  I will make a peg bag too because wooden pegs don't like getting wet. I'm one of those annoying people that leave the pegs on the line.  Actually dolly pegs aren't that great for hanging washing but who cares when they look this pretty.

Yesterday I was quietly minding my own business, doing a bit of stitching, watching the Belgian Grand Prix, when I got a guilt pang and went down to see how John was getting on.  He was finishing the tiling over the bath - yes they have a bathroom now.  I did a bit of pottering for him - passing things, plugging in, sweeping etc.  By 6.30pm it was a bit late to be hammering and drilling so we tidied the sitting room ready to be painted. 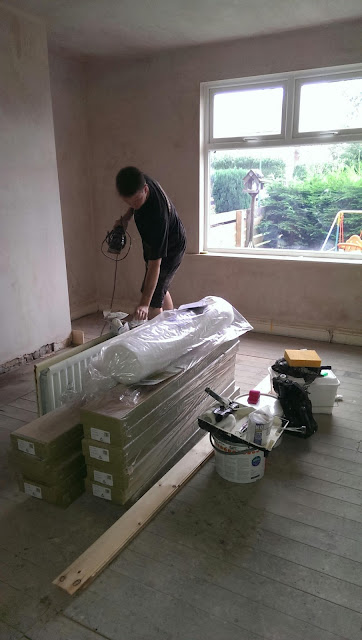 I went and got a nutritious chicken fried rice and took it round to the flat. Steph packed up a couple of portions and went off to join John and the paint pot. I settled down to watch the end of the Great British Bake Off and Vera, but fell asleep half way through and have no idea who 'did it'.

John has put new skirting board in the bedroom, fitted the kitchen, tiled the bathroom and is going to lay the floor in the sitting room as soon as they get it painted.  The carpets are being fitted on the stairs and in the bedrooms on Thursday and they plan to move in at the weekend.  I'm so proud of how hard John has worked.  Thanks to the delights of YouTube he has been able to see how to do all sorts of DIY and he has taken such pains to do it right.  They got the keys for the house at the end of June.  It was a complete wreck and he has been working nearly every evening and all the weekends since to make a home for the three of them. Makes my heart swell!  I'm looking after Ben today so that they can get on with the final push.

Sewing! What have I been sewing?  Well I'm nearly finished one thing: 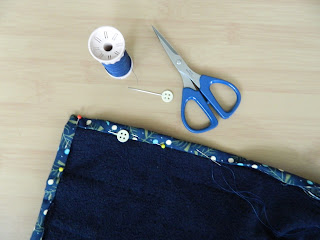 I'm ready to quilt the top we made at school for our first donation to 'Quilts for Comfort'.  There's a tab at the top of this page with instructions on how to make this quilt. 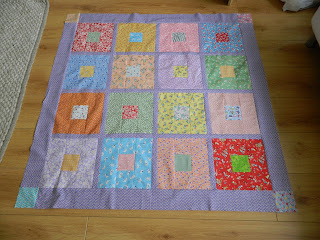 The light wasn't too good when I took this picture.  It's much brighter than it looks here.  It will be my last major thing before work starts in earnest after the Summer Hols and the building works at school.  Oh joy.

Until next time, keep safe.
Posted by strawberrypatches at 08:43