Not much achieved, Gladys

This week I seem to have a Time Nibbler sitting on my shoulder.  This is the week I'm on holiday (hence the storms yesterday after weeks of warm weather) but I don't seem to have achieved very much at all.  Alison (aka Mavis) and I spent our usual happy Saturday morning on 'the hill' painting.  I am making up one of my beehive key holders for Steph and John's new house. I've been searching for the original one I made for a friend in typical beehive colours but mustn't have taken a photo.  This is the start of the latest one which is in muted creams, pinks and greens so far. I started by base-coating with buttermilk and then streaking some soft pinks and grey/greens across the surface.  Then I used some sequin waste as a stencil for some watered-down grey which I highlighted with full strength paint. I will be adding lots more things - words, embellishments and other goodies.  This is as far as I got and things have gone downhill since. 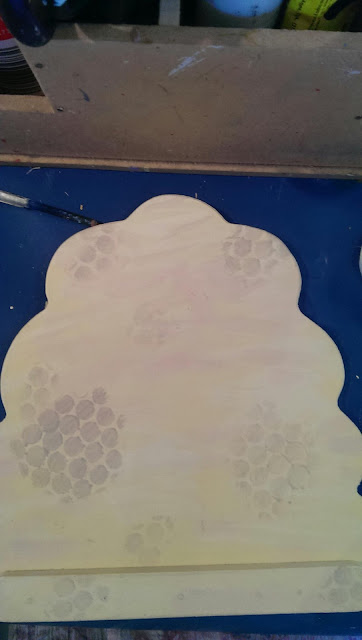 John rang to ask if I could look after Ben while they did some work in the house. Below is a dusty boy seeking advice on how to lay floor tiles... 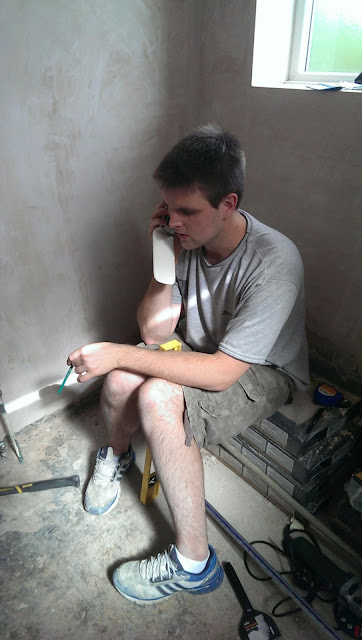 The tiling continued on Sunday so Ben came over for a few hours. He wasn't impressed with what was on the telly, so we switched it off and played with his toys, went for a walk and slept soundly for an hour. 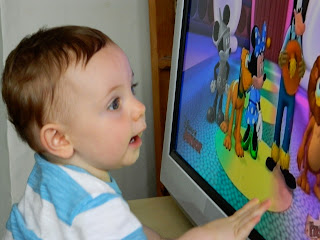 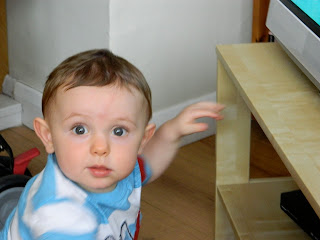 Then we all went to Ikea for a spot of lunch and some kitchen shopping. John had designed it all out but wanted it checked and they couldn't do it whilst we were there because of the huge queue of people wanting to do the same thing. Ahh, the joys of sharing Sunday afternoons with the Great British Public. 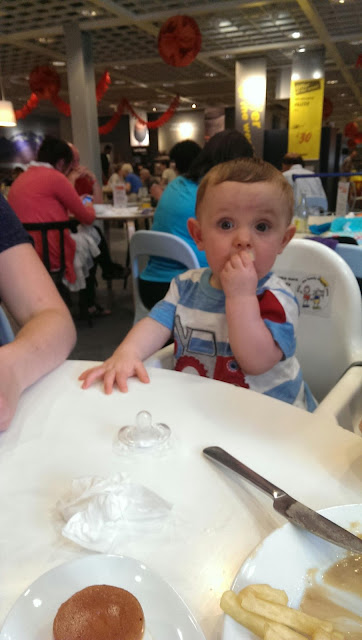 Steph and I made an appointment for Monday at 4pm but were halfway through proceedings when we had to evacuate the store because, ironically, the rain had set the fire alarms off.  We had to walk all the way round the back of the store in the pouring rain.  In our summer sandals.  In a temper..... this was the exit road.  We had to leave because Ben needed to have tea and get ready for bed (me too Ben, me too). 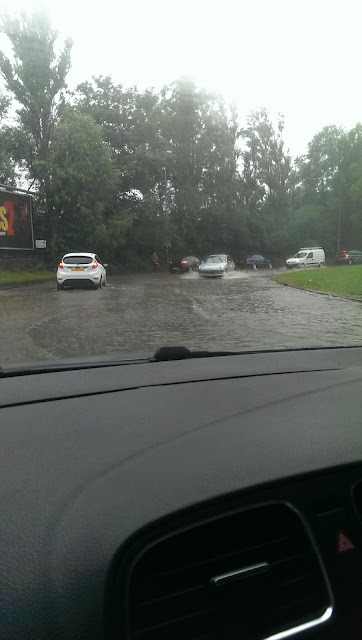 So I finished the job all by myself this morning and it will be delivered to their new house on Friday, all 96 packages.

I have been making more smoothies this week in my effort to eat a rainbow. I'd already had green. This was red: 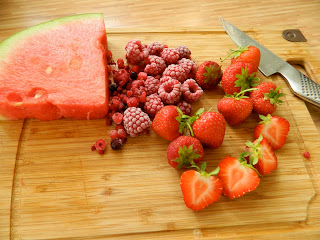 Frozen fruit is good - raspberries are my favourite - this was ultra-yummy. 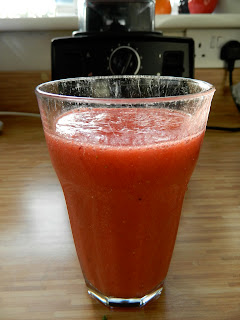 I loved the orange version but John thought it was horrid.  He didn't like the raw sweet potato (which I often munch on). 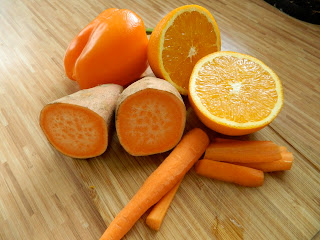 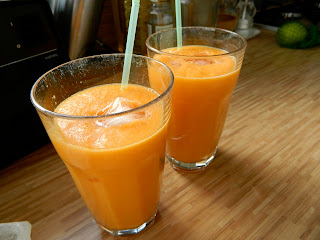 John made purple last night but I didn't get a snap of the ingredients (beetroot, rainbow chard, cucumber, lime and ginger). 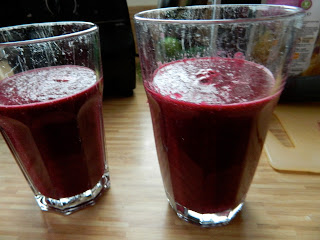 The ginger was eye-watering so we used a whole cucumber to soften the blow. I think perhaps beetroot is better from the juicer because it was quite a lot to swallow in the end! For the purists I will not be doing separate indigo and violet - the purple will have to suffice.

Tonight I am going to make 'yellow' with some pineapple and mango which was going cheap in Asda today.  I also have some blueberries for (strangely enough) the blue smoothie.  The green is awesome though. I think I'll do a green one most days. I have loads of bits in the garden that will do. They are also incredibly filling compared with juiced fruit and vegetables so although it seems a bit expensive when you put in things like a whole cucumber or pepper it is really a meal in itself.

I dropped my the iron again yesterday - naff design - the tank comes loose if you pick it up wrong and it jumps out of your hands and crashes to the ground. Luckily the only things that have broken are the bits of plastic that you wind the cord round.  It still works.  Unfortunately that tipped me over the edge and I was on my hands and knees mopping up water and snivelling piteously that the Time Nibbler had something against me this week.

Well it was third time lucky with the trip to Ikea, the larder is full and now I am going to boot that Time Nibbler firmly up the jacksie.  I have some serious stitching to do and it starts now.
Posted by strawberrypatches at 16:43