What a lovely peaceful weekend I'm having. John and Steph are busy arranging their new house - no mean feat if I remember rightly! Not helped I have to say by the flooring downstairs which was not laid properly even though there was no furniture to move. Now it will have to be relaid and all the furniture moved. Steph, still unpacking, is wondering how they fitted so much into their smaller house!

Will and Alex are in the Lakes for the weekend.  They walked up a hill which Will says should be classified as a mountain as it is above 640m. 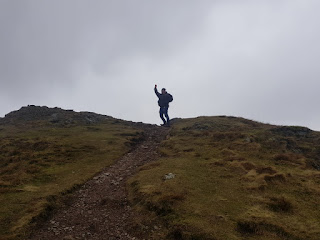 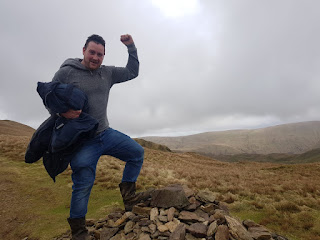 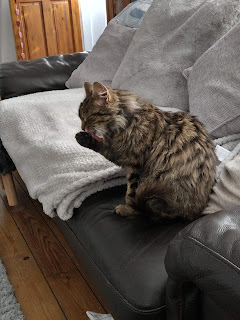 Back at home I have just finished a little zippered bag requested by one of the ladies at the class.  The pattern just needs to be finished off. I know the flower is pretty generic but I saw a similar design somewhere. This is my take rather than my design. 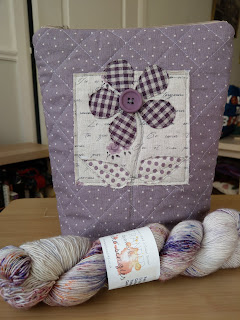 A perfect size for a project bag. 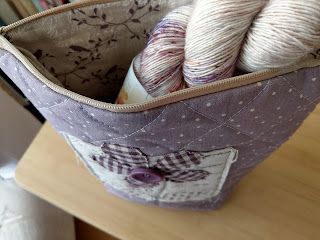 It's made from linen bought at Birmingham last year and Sandown the year before. 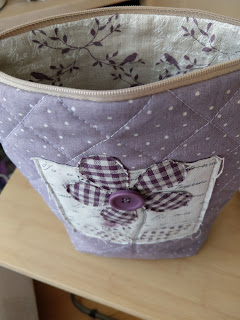 I wanted it to look a bit shabby chic so I used light-weight iron-on interfacing to stabilise the shapes but sewed them with a raw edge. 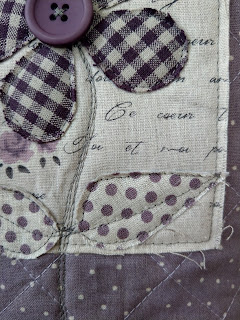 I very rarely machine appliqué but I'm really pleased with this, although it is a bit narrower than I intended as I didn't quite get the little motif central and had to trim a bit from the side. Oops.

Originally I had planned to use Bosal to stiffen the bag but it didn't look right so I patiently unpicked the quilting and substituted 80/20 wadding and medium weight interfacing to give it some body. Nobody likes a floppy bag!

Project bags are a recent phenomenon for me. They are much more attractive than plastic bags which I have used in the past to store little projects. The knitting community seem to revel in their beauty almost as much as the projects that go in them.  So they are double pleasure, the first in making the bag and the second in having something beautiful and practical to store knitting, crochet and other little doo-dads and gewgaws. Win win.

Now I'm marking and layering the little linen and lawn quilt (42" x 36"). I will probably take this to Karin's on Thursday although if history is anything to go by we'll be talking nineteen to the dozen. I just like to have the option. 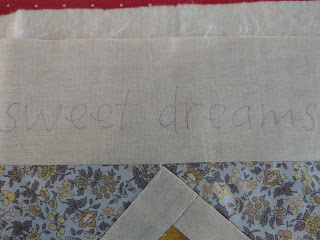 We are going to Unravel on Thursday - squeak. This is a festival to celebrate all sorts of yarny things, particularly Indie Dyers and designers. This will be the second visit to Unravel which - happy coincidence - is ten minutes from Karin's house in the town of Farnham.

I've been to three, or is it four, Yarndale Festivals in Skipton, which is about an hour and a half's drive from my house.  I am hearing really good things about the Edinburgh Yarn Festival too but that is at the end of March - a bit too close to Unravel and probably too tempting for someone who has enough yarn to reach to Venus and back, but I may visit next year......

The Battenberg blanket squares are coming on.  I'm about half way through the colour pack which John got me for Christmas. Each little ball makes two squares (aran weight). 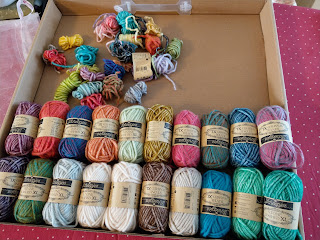 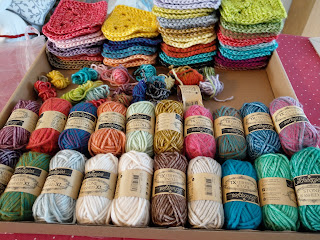 I'm a bit tempted to do a few plain squares which are join-as-you-go. It's a dilemma though. Do I get all the coloured squares done and set them out to make sure they are evenly distributed and risk getting bored with the neutral squares? Or do I forge ahead and join them with the risk of ending up with a pile of ugly colours in one corner because I've used all my favourites up? I can think of worse dilemmas!

So peace and harmony are restored in my life. I'm back in my own bed, the towels are all folded in the right direction and the half used packet of peas in my freezer has got a little clip on it to stop them falling out. The lids are on the jars and my creams and lotions are lined up neatly. All's well with the world.