A few days off to recharge

I set out last Thursday after work to stay with my best friend for a few days. Apart from getting stuck in a traffic jam in Yorkshire the journey to Farnham was uneventful although it did take six hours. I did it in one hop though which saved a half hour. I normally stop for a McWee just before the M25. 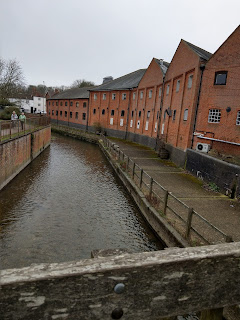 Farnham is a lovely higgledy-piggledy town in Surrey and happily only a ten minute journey from Karin's house.  The Maltings has a Great Hall and a myriad of little rooms which were full of people selling gorgeous things.

I did have a plan though. Yarn from Stranded Dyeworks whose Podcast I watch every week - what a character!  I also wanted a little drop spindle and some wooly stuff to spin. 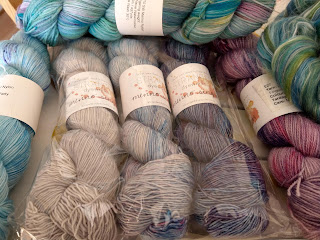 Angora from some rabbits and some merino/silk blend to spin. 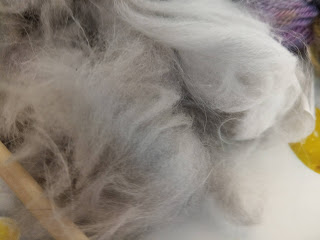 So I had spent most of my hard earned dosh in the first half hour, by which time it was getting very crowded (I really hate crowds).  We retired to the little cafe and had a delicious cheese scone and hot strong coffee 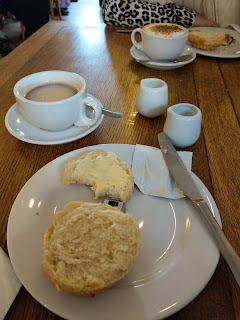 We rejoined the fray but it was too much so we came home with our purchases (and I still had £13 in my purse). Hand dyed wool is very expensive but utterly individual. I got a skein for Alex who is just embarking on her knitting journey (the coloured skein on the right) and have printed out a pattern for her from Ravelry - what a resource that website is. Fabulous. 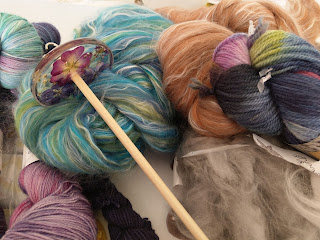 Over a cup of tea I did a bit of spinning but we were laughing at my efforts so much I really only made a few lumpy yards!  I did a bit more when I got home. I have 150 grams of fluffy stuff and I will master the art. Eventually. 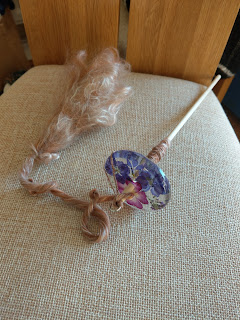 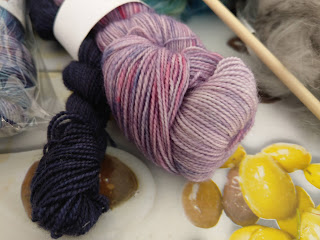 I drove home on Sunday morning, again in one hop. It was lovely to get back to my little house with its really powerful shower!

My main focus for the rest of my time off was a shawl made with brioche stitch and shaped garter stitch panels. After eight attempts I managed the first panel of brioche. I decided to leave  a few mistakes in because I thought I would abandon it if I unpicked it one more time.

The second panel is better, especially after I realised you had to hold the yarn really tight to stop the bagginess that normal tension gives.  So this is where I am after my few days off. 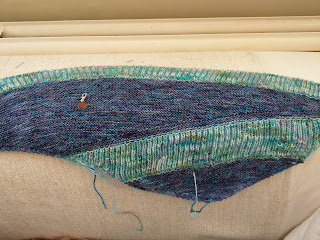 Another shaped panel will restore the triangular shape of the shawl. 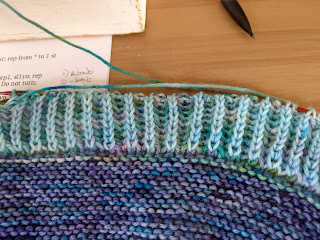 One side of the brioche is pale blue 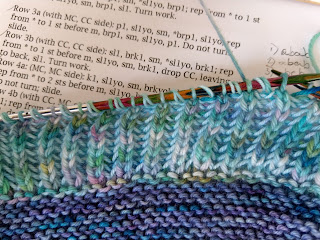 The other is multi blue - not a huge contrast which made it hard to do for the first time but I'm getting there.  The stitch pattern is beautifully soft and squishy but almost impossible to correct if you make a mistake and also almost impossible to frog back. The final panel has over 300 stitches on so it will not get pulled back. No sir.

I haven't done a stitch of my patchwork and nothing in my house. I'm back to work this afternoon but feel recharged which was the main reason for the break of course.

I'd better get on with the pattern for class tomorrow night and maybe a tray of Millionaires Shortbread too. I got a text from John to say they were missing Cake Friday last week. I paraphrase, there was an alliteration -  'what, no Cake F... Friday?' I think the text said.

Well I'm going to reload the washing machine and slip another couple of rows in......