Saturday morning.......I was talking with a patient the other day whose partner has been on anti-depressants for literally decades and was sick of taking the tablets.  He said she had been advised to go to crochet therapy. Yes yes! 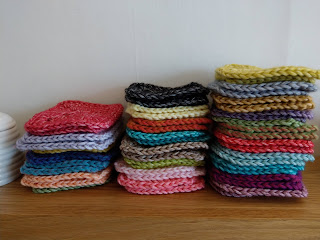 Quilting has been my mainstay for many years but latterly I have done a lot more crochet and now my knitting mojo has been re-ignited.  The rhythmic counting involved in knitting and crochet and the concentration involved in hand quilting is pure therapy for me. When I had a really stressful job it was my meditation. Doing patterns for crochet and knitting involves repetitive counting - a mantra.

As John says - happiness is a journey not a destination. Stitching is my happy journey. Having something at the end is pure bonus.

This week I've been working extra hours to cover Steph who is easing Ben into his new school, so not much stitching is taking place, sadly. Yesterday I managed to get the little lattice quilt finished and am just in the process of embroidering the words. It's so pretty (should I be saying that about my own work?) 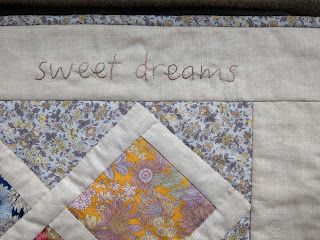 It's been a long slog at work these past few weeks. The clinic is open for 10 hours a day during the week and Saturday mornings as well.  I love the work but I'm a bit of an old chook to be slogging away. John is there all the time but I have two half days off and only work every other Saturday.  I don't know how he manages, what with Max's weird sleeping patterns thrown in.  He regularly wakes up for four hours during the night. I have him to stay about once a month at the weekend to give them some respite. Not one of the other grandparents will do that. Just saying. Even when he wakes in the night he's a happy little chap, he just giggles and sings. 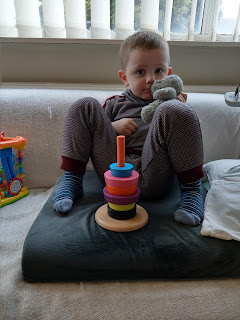 He's a pleasure to have around although full time would be very hard going. He's just sitting cross legged on my coffee table now. If I want to crochet I just give him an old messed up ball of acrylic and a hook and he sits with me while I crochet then he stacks up the squares I have made.

Sunday morning.....I've made a few more squares this week but my attention has been held by the shawl I'm making. I'm now on the penultimate band and will be ready for the final run at the brioche section which ends up with 373 stitches. I can't stretch it out flat now with just under three hundred stitches but I'm loving it.  I need to make a little stitch keeper to stop the stitches coming off the end of the needles when I'm not knitting. That would be a disaster as Brioche Stitch is impossible to pick up (for me anyway). 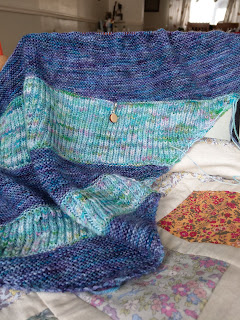 I've been watching a knitting podcast in which three friends discussed the meaning and their interpretation of International Women's Day. It was very interesting as they drew out the different aspects of that celebration and how it fitted into different cultures. It's called The Crimson Stitchery Podcast if you are interested. Three Londoners, two of them PhD students, one doing a Masters degree, one of them a born and bred Londoner of Malaysian descent, one Norwegian and one French, all united by knitting and our education system.

I've been a busy cooking bee this morning making a frittata and some cottage pie topped with root vegetable mash. Some for today and some for the freezer. 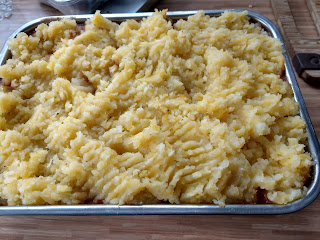 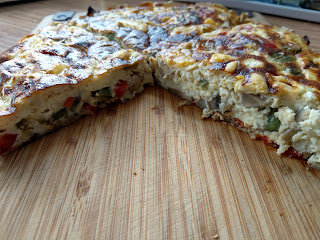 At the moment I'm sitting watching Six Nations Rugby - Ireland playing France. I've just finished the embroidery on the little lattice quilt and will post a picture in my finished articles tab when it's had a little steam. It's been a relaxing day at the end of a busy week. Just the ticket.

Hopefully I'll have a little more time and energy to stitch in the coming few days - in the meantime have a good week everyone. xx
Posted by strawberrypatches at 15:41