Many a stocking was stitched

There was a Mavis and Gladys Workshop at High Street Quilting on Saturday 7th December.  The night before I got some paints out (bearing in mind I haven't been painting on 'the hill' since 23rd November and am suffering serious withdrawal symptoms).  I had some white bags for the patterns so I thought it would be nice to decorate them for the ladies. 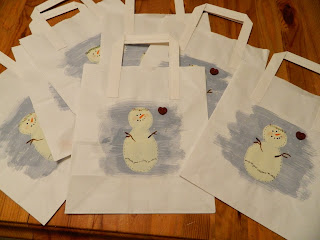 I painted on a coat of gesso to seal the surface then washed a thin coat of Winter Blue over that. The snowgirl was painted with Light Buttermilk and decorated with yew boughs. A few snowflakes were added with my lovely dotty tool and a little bit of pen-stitching and a cinnamon heart finished the little scene. 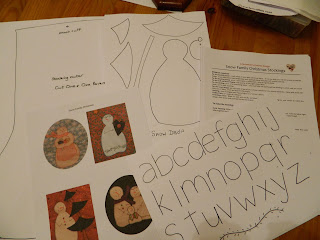 I laid out all the parts of the pattern - there is nothing worse than forgetting some element.  Sadly I very often do because I am a bit of a last minute person. (New Year Resolution I think). 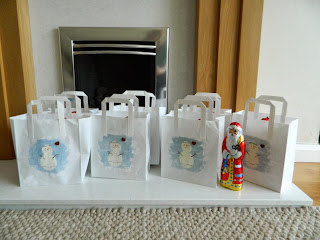 I decided not to bake for the class because some generous person or persons unknown had given me a nasty cold. Cupcakes from the kitchen of viral plague did not seem appealing.  So I schlepped down to Aldi for some award winning Mince Pies and a choccy Santa for each bag. Oops did an extra one find its way into my shopping basket?  It's ok I destroyed the evidence later that night.

After a lot of fabric choosing and little bit of machine maintenance: 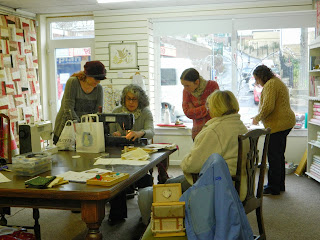 everyone settled down to sew. 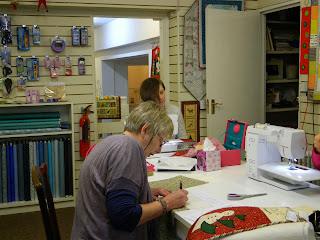 A bit of machining, a bit of tracing, 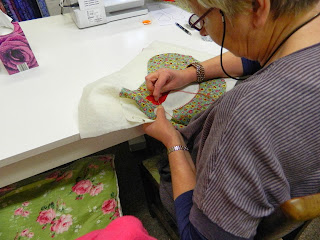 Quite a lot of hand sewing, 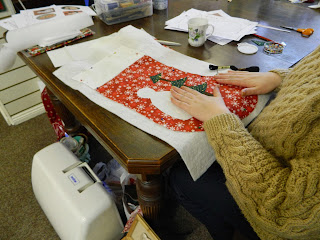 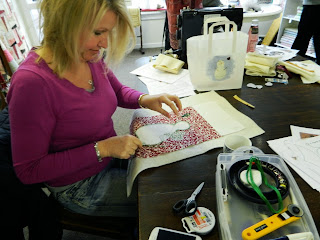 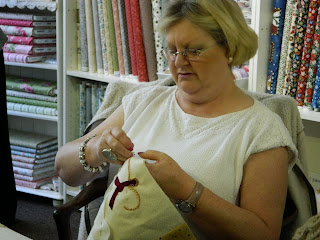 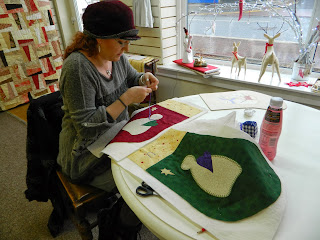 I have to say it was one of the most industrious group of people I had worked with. I hope everyone got far enough with the stockings to finish them - some were very close, but it had been an intensive session and I think there were some sore fingers at the end!  How different they all looked too. The variety of fabric choices and interpretations always amazes me.

Sunday saw John fixing my tiles in the bathroom which needed some attention. I fell asleep on the sofa and when I woke up Steph had washed the dishes. Just love 'em for looking after their mammy. Ben was his usual charming self despite being a bit under the weather. Although I did find a lemon and a stock cube underneath the sofa after they had left.  He is into cupboards, literally, at the moment.

I've had two colds this winter.  Normally I get one every 5-10 years - very thankfully I've never had to suffer during every winter season.  I have decided I'm not eating enough veggies at the moment and have paid the price.  Easily rectified though.  Get home early enough to prepare a decent evening meal, don't stress over work so much and (my favourite bit) eat/drink your greens! 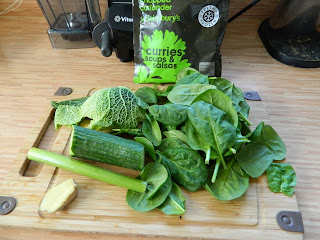 I think I would get bored before I ate all these but a quick zap in the liquidiser produces my green goddess drink. 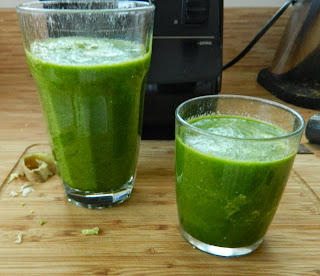 Please ignore the state of my glasses - I reckon it's a small price to pay to have the dishes machine washed!  Actually this was a bit bitter with the savoy cabbage so I added some apple juice and it was lovely.  The small glass will be my afternoon pick me up.

So - halo polished I am ready to meet the day.  I need to keep energy levels up because it's only 16 days to Christmas - argghhhhh.
Posted by strawberrypatches at 11:34