Once in a Blue Moon

On Thursday, after the class, I was unloading the car.  When I turned round I saw this - the second full moon of the month - a Blue Moon. 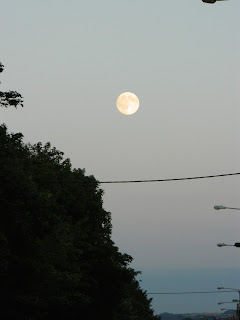 This was taken at about 9pm and it it got better. I find the moon a fascinating celestial body.  I was 15 when the first Moon Landings took place and I can remember looking up and not quite being able to believe that someone was actually walking on it as I watched.  That fascination has never stopped.  I love watching the phases of the moon, seeing a golden harvest moon, lunar eclipses, stories of the moon and its effects on earth. Lovely.

For the class I baked some more lemon bars - so decadent - sharp, sweet and buttery. 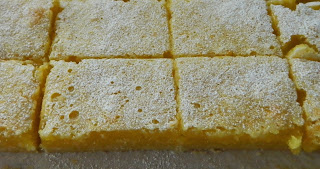 I've been experimenting with some other flavours - this afternoon I baked some chocolate malt cupcakes (with Ovaltine).  These are quite strange in that they didn't look like they were properly baked even though the skewer came out clean.  They are moist and quite like brownies but very light, with a lovely malty flavour. 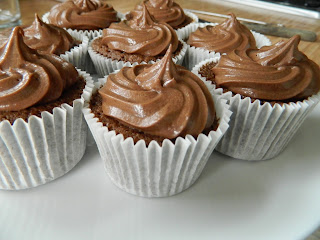 I've been working on the hexagon bag tutorial and hope to have that published later this week.  It's spawned all sorts of ideas for other projects which I'm madly writing down in my notebook in case I forget (sorry, when I forget). I didn't take enough photos of the original make, so I've done some more hexagons - just smaller. 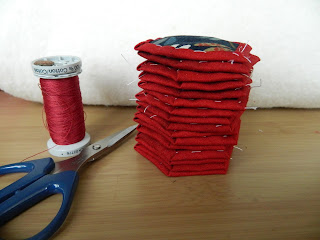 I'm also drawing some more blocks for the Durham Quilt, although I have finished my nine-block version. One of the ladies wants to make a much bigger quilt with twelve blocks and an eight inch border.  It's been very difficult to get a decent photo of the quilt and I'm afraid the best one is hanging on my washing line.  The pretty centre block doesn't photograph well but you can at least see the depth that quilting gives to a fabric. If I can manage a better one I'll publish it here later. This really doesn't do it justice. 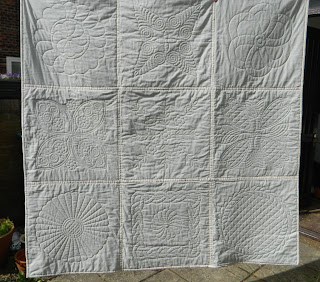 It will be on display at High Street Quilting from next week.  I've written a pattern for a cushion cover which can use any of the blocks but I need to get my head round writing all the parts for the quilt, and making sure all the patterns are accurate.  There's a world away from writing a pattern for a complete stranger to buy and teaching a pattern to the ladies in the class.

John is busy putting the little Seat Arosa back on the road. The starter motor and driver's window stopped functioning a while ago and it has been sitting in my garage waiting for them to get it going again. John and Ben worked on the repairs on Sunday. " Daddy, I fixing the buttons" (tightening the nuts on the door cover). 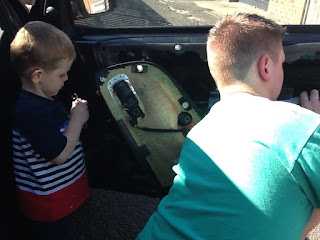 while Max had a quick bottle (he looks positively tipsy) 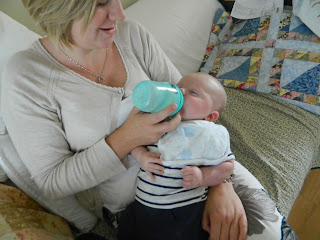 Then Ben did a bit of washing, 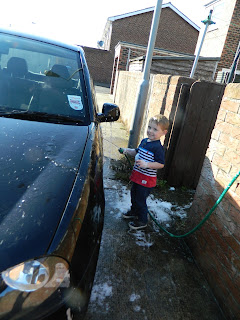 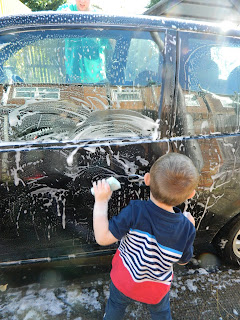 which quickly degenerated into a splash splash session. 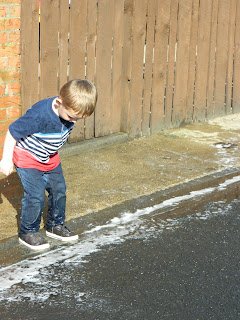 How was I to know he had new Ralph Lauren shoes on? My lovely little boys grew up on a farm and I can't remember ever buying designer clothes for them.

They did get dressed up every now and then but it was probably once in a Blue Moon.
Posted by strawberrypatches at 16:58