I collected a lovely bag of gorgeousness this morning - be still my beating heart!  Sitting down with a cup of coffee and a little baklava or two I spent a happy half hour sorting the piles into a little box that I happened to have lying about (a few years lying about - but it is now a very useful little box). 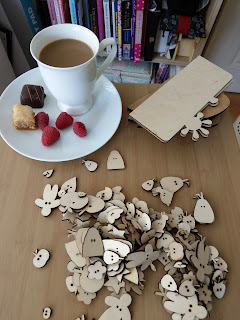 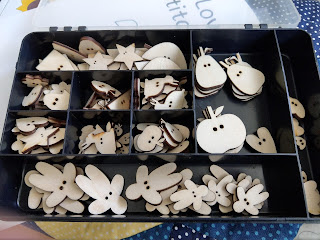 I had a few errands to run this morning so I'm not going to have much time to sew but I will get on with bits I have prepared until John comes to collect me at two.

First of all the August Mini Quilt - this will have a little bee button on it too. 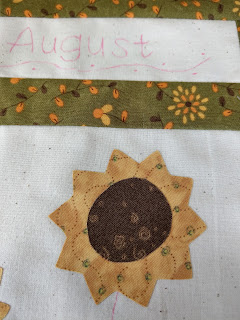 Just some little french knots to add for 'seed's and the back to sew on. 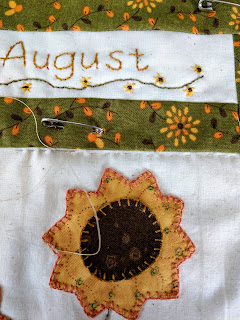 Also on the list for today is a little more for my sewing machine cover - I fussy-cut the flowers from some lawn. Still having a love affair with linen and lawn. I'll embroider the lettering with back stitch and buttonhole around the flowers and leaves. It is the most relaxing thing to do. 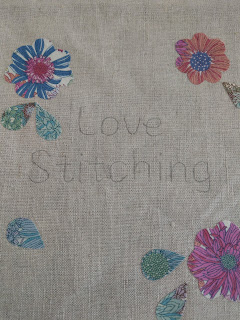 Oh I think this should have a little been button on it too! Maybe I should have asked for more of them.  There are some tiny little apple buttons which will be going on my September Mini Quilt. Squeak.

There are more designs swirling around in my head for the last three months of the year too. So exciting..... 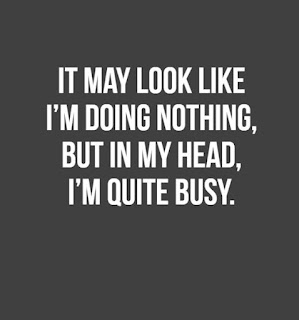 That was on a blog I follow - so apt! Although sometimes there is nothing going on at all in my head!

The washing machine is beavering away and I'm going to run the vacuum cleaner round quickly so I won't feel too guilty about sitting sewing.

We are having a nightmare with the network at work at the moment - everything went down again yesterday. Tomorrow someone is coming round to fix it or give it the last rites. Fingers are crossed all round that it is not going to be too costly, but somehow I think it is.  The system is fantastic when it is working but so frustrating when things go wrong.

I've discovered a new blog with the most stunning photographs on - take a look at Reflections and Nature - the colours are awe-inspiring and she likes a bit of crafting too.

One of the ladies at the class is bringing cake tomorrow so I might make something savoury to take. It will have to be made just beforehand though seeing as the weather is so hot.  Yesterday was muggy and airless. It rained a bit but it didn't really refresh.

Will is in the middle of harvest now (cutting barley and wheat) so he may not be home for lunch.  It's a full-on time of the year for him and he is exhausted at the end of a long hot day.
Posted by strawberrypatches at 06:52