Umami and other pleasures

When I was at school we were taught that there were 4 flavour groups the tongue could distinguish - sweet, salty, sour and bitter.  Not so many years ago I discovered that there was a fifth distinct taste - umami.  It was actually identified over a hundred years ago but I didn't know that the flavours I love (marmite, mushrooms, anchovies, worcester sauce, soy sauce to name a few) had a name.

My mother had the same experience when she was younger.  One evening, when we were visiting my uncle and aunt, she confessed that she didn't know what an orgasm was until she was more than thirty years old.  My father looked crestfallen.  When she saw the look on his face she assured the assembled company, much to the embarrassment of my brothers, cousins and I, that she knew what it felt like, she just didn't know the word.

Language is a wonderful thing.  My father, physicist though he was, loved English Literature.  His shelves were full of books ranging from Shakespeare's sonnets to particle physics and he never lost an opportunity to slip a new word into a conversation, even apparently when we were babies.  Thanks to my mother though I learned the meaning of such words as abstruse and verbose at a very young age.

Not knowing words doesn't mean that you haven't experienced their meaning at some point in your life, but knowing how to express the subtle nuances of meaning certainly gives me pleasure.

Tescos (according to myth £1 in every £7 you spend is at Tescos) sell the pleasure of Umami in a bottle: 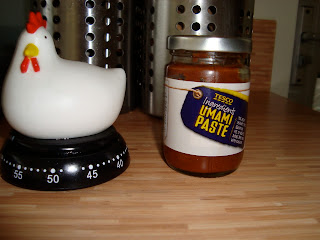 What I would like to know is - when are they going to bottle the other thing?